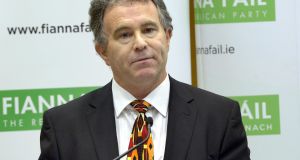 Fianna Fáil spokesman for public expenditure and reform in the last Dáil, Seán Fleming was first elected as a TD in 1997 and served a dual mandate for four years after being elected to Laois County Council in 1999. From The Swan, a small village in the southeast of the county, he is a chartered accountant who holds a B Comm from UCD. He served as the party’s national financial director prior to embarking on a career as a public representative, and has been a member of the Dáil Public Accounts Committee and the Oireachtas Finance, Public Expenditure and Reform Committee over the last five years. Fleming campaigned on a number of financial policy issues during the last Dáil, most notably on the topic of variable rate mortgage charges imposed on homeowners by banks.