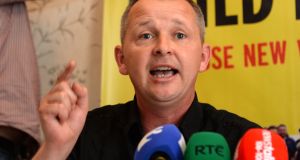 First elected to the Dáil in 2011 as a People Before Profit Alliance (PBPA) TD under the United Left Alliance (ULA) banner, Richard Boyd-Barrett secured 9,775 first preference votes this time. He contested the 2016 general election as part of the unified Anti-Austerity Alliance-People Before Profit grouping. Boyd-Barrett was judged to have performed well in the seven-party RTÉ debate involving party leaders and nominated leaders. He has been an outspoken critic of the Fine Gael/Labour administration from the Opposition benches in the 31st Dáil. Born in London, he is the son of the actress Sinéad Cusack and the late theatre director Vincent Dowling. He was adopted by Valerie and David Boyd-Barrett at an early age, and grew up with them in Glenageary. He is single and has one son and one stepson.