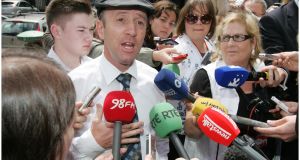 Michael Healy-Rae, aged 46, wears a flat cap, and is a native of Kilgarvan. Married to Eileen, they have five children. First elected to Kerry County Council in 1999 in a tight race. He is the youngest son of the late Jackie Healy-Rae, TD, who died last year and who left Fianna Fáil to run as an Independent in Kerry South in 1997, taking a Dáil seat. When Jackie retired Michael succeeded his father winning a seat in 2011.