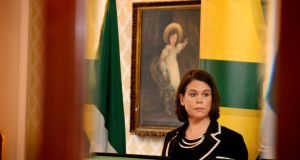 Sinn Féin deputy leader Mary Lou McDonald (46) is a leading star in the party and is frequently spoken of as a future leader, rivalling finance spokesman Pearse Doherty. However, in a macho republican party, despite her ability and the level of public respect she has earned, many feel her gender and the fact she is from the south greatly hamper her chances, while being from an Ulster county helps Doherty. An MEP before she became a TD in 2011, she has built a high profile as an articulate and effective Dáil performer. She has compared the role of the 1981 IRA hunger strikers with that of those who fought for independence at the foundation of the State, stoking some antipathy. Married with two children, she is a graduate of Trinity College, University of Limerick and DCU.