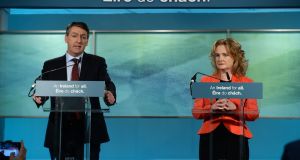 In contrast to his fight for survival in 2011, Billy Kelleher (48) comfortably retained his Dáil seat this time around, a seat he has held since 1997. His assiduous work in the constituency continued during the last Dáil, securing his position in a competitive field. He has first-hand experience of the importance of every ballot paper, having lost in the 1992 general election by just 25 votes. The party’s health spokesman in the last Dáil and one of the party’s most frequent contributors, he is an able media performer and is seen as a potential future leader. He was a senator from 1992 to 1997 and served as deputy government chief whip in the 2007-2011 Dáil, prior to his appointment as a minister of state for trade and commerce before the economic collapse. A Glanmire-based farmer, he is also a major GAA supporter. He is married to Liza Davis and they have three children.