President of the College of Psychiatrists of Ireland: “These women could be psychotic, have voices in their heads telling them to kill their babies”

‘Real risk’ of suicide during pregnancy 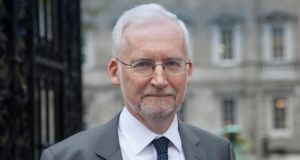 
It was extraordinary that those opposed to legislation in Ireland disregarded the fact that some women going abroad for an abortion needed psychiatric care, president of the College of Psychiatrists of Ireland Dr Anthony McCarthy told the hearing.

“These women could be psychotic, have voices in their heads telling them to kill their babies,’’ he added.

Dr McCarthy, a specialist in perinatal psychiatry at the National Maternity Hospital, and a psychiatric assessor for the confidential inquiry into maternal deaths in Ireland, was speaking on the second day of the Oireachtas health committee’s hearings on the heads of the Protection of Life during Pregnancy Bill.

He said women who regretted having an abortion, and suffered because of it, might not have gone abroad if there was psychiatric assessment and treatment in Ireland. Their children might be alive today.

Dr McCarthy said pretending there was no issue involved in women travelling abroad for an abortion represented a sign of our national ability to ignore difficult questions.

“Let them go to Northern Ireland, Norway, or wherever they go now to have their terminations or, increasingly, let them take their medication that they buy over the internet, in their hotel rooms here or in their homes, and abort their babies as women over centuries have done,’’ he added.

“I have seen women in their 80s who talk about sticking knitting needles in themselves before abortion was available in England.’’

Dr McCarthy said suicide in pregnancy was a real risk and did happen. “This is always a tragedy, at least two lives are lost, and many others are hugely affected,’’ he added. “We must do everything we can to prevent such deaths.’’

He said much had been made about the so-called lack of evidence regarding abortion and whether it would ever prevent a suicide. He believed that there would never be statistical evidence to prove that point, one way or other. “Because trying to prove anything statistically for such a rare event is extremely difficult if not impossible,’’ Dr McCarthy added.

Founding member of Doctors for Choice Dr Peadar O’Grady said imposing a requirement for three doctors to assess a suicidal pregnant woman would cause unnecessary delay.

“There is no medical basis for differentiating between a medical emergency and a psychiatric emergency,’’ he added. “All psychiatric emergencies are medical emergencies.’’ Dr O’Grady, a consultant child and adolescent psychiatrist, said children were not specifically mentioned in the legislation, even though they were most likely to experience difficulties in their ability to travel for an abortion. This could result in them being at increased risk of suicide.