Paul Dunne: Seanad tributes to golfer who ‘came out of the blue’ 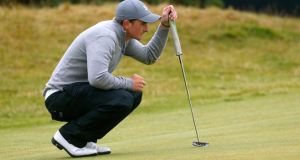 Paul Dunne’s time at University of Alabama and at Blackrock College in Dublin was mentioned in the Seanad. Photograph: Danny Lawson/PA

Golfing boy wonder Paul Dunne has made a lot of Senators very proud, although a number admitted not previously knowing who he was.

In the Upper House yesterday, Fine Gael Senator Éamonn Coghlan said he had got a number of texts from people asking: “Who is this guy?”

The former world champion athlete admitted he did not know anything about the young golfer until the British Open, but “I have great deal of pride in him”. He added: “It’s always great to see someone come out of the blue.”

Mr Coghlan, a US college scholarship veteran, referred to the open contender’s time at the University of Alabama and at Blackrock College in Dublin. “Having finished fifth in the National Collegiate Athletic Association, NCAA, he is going to do things,” he said.

Suggesting Ireland could be a world leader in sports tourism and particularly in golf, he called on the Department of Transport, Tourism and Sport to support and “really promote” a golfing tourism package.

Fine Gael’s Michael Mullins pointed to the comments of an US golfer who described him as “the greatest golfer he had never heard of”.