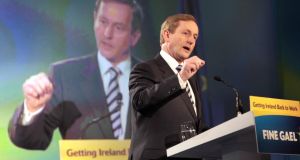 As the largest party in the Oireachtas, Fine Gael came top of the list for state funding with a total of € 4.9 million paid to the party last year. Photograph: Brenda Fitzsimons/The Irish Times

A total of €12,963,160 was paid out to a range of parties under two schemes designed to fund the political system while just under €1 million was paid to Independent members of the Dail and Seanad.

As the largest party in the Oireachtas, Fine Gael came top of the list for state funding with a total of €4.9 million paid to the party last year.

The Electoral (Amendment) (Political Funding) Act 2012 introduced a new requirement that the annual sum will decrease in line with general pay reductions in the civil service. There were no increases or decreases applied to the fund in 2012.

The funding is not subject to income tax and may not be used for electoral or referendum purposes. Qualified political parties must furnish to the Standards Commission Statements of Expenditure of the funding received.

However, Independents are not required, however, to provide a statement of expenditure of the allowance to the Standards Commission, or to any other authority.

Minister for Public Expenditure and Reform Brendan Howlin has announced his intention to audit the payments to non-party members of the Oireachtas in receipt of the allowance.

Details of the funding and how it was spent are contained in two reports published today by the Standards Commission. These reports are available on www.sipo.gov.ie.