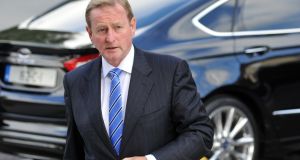 Opposition parties have called on Taoiseach Enda Kenny to meet political party leaders in the wake of the Spotlight claims. Photograph: The Irish Times

Minister for Finance Michael Noonan will publish the Comptroller and Auditor General’s report into the National Asset Management Agency (Nama) sale of its Northern Ireland portfolio before the Dáil formally resumes on September 27th.

Mr Noonan told Sinn Féin finance spokesman Pearse Doherty during a question and answer session after the EU Commission Apple ruling debate in the Dáil that he had received the report in August and would publish it before the Dáil returns. Mr Doherty has consistently raised the Project Eagle sale in 2014 of 860 properties for £1.24 billion (€1.48 billion) to US investment firm Cerberus.

Earlier Sinn Féin leader Gerry Adams asked for time to debate revelations on a BBC Spotlight programme about allegations of illegality within Nama and the sale of the Northern Ireland loan book known as Project Eagle.

Mr Adams said Sinn Féin TDs and a number of other TDs had raised the issue of the Project Eagle sale of some 860 properties for €1.6 billion from distressed loans of buyers based in Northern Ireland to a US venture fund. He said there was “some credibility to our allegations”.

Fianna Fáil leader Micheál Martin asked the Taoiseach to call a meeting of all party leaders to deal with the very significant legal issues involved in the case.

Mr Kenny told them however that there was a criminal investigation going on and “we can’t interfere with that”.

The Taoiseach said he would consider if there was some way outside the investigation to deal with this and he would get back to the party leaders.

The Spotlight programme on Tuesday night broadcast an audio recording of former member of the Nama advisory committee Frank Cushnahan allegedly receiving a £40,000 sterling (€48,000) from a Nama borrower, in a hospital car park.

Referring to the alleged £40,000 payment, Mr Wallace said it was “mind boggling to see those bundles of cash passing hands. It was kind of scary.”

He said “Republic of Ireland developers were enforced upon four times more than developers in Northern Ireland”.

The Wexford TD said Nama claimed Mr Cushnahan had no access to any commercially sensitive information. “Who in God’s name believes that anymore? How could this man be able to command so much money if he had no confidential information?”

He claimed the Government was “running around in a tizzy as it sought to investigate Pat Hickey and the Rio scandal that involved a couple of hundred thousand euro, but it does not want to know about hundreds of millions of euro in this case”.

And Mr Wallace believed “enough questions have been asked and enough information has been brought to the table about what has been going on to require the Government to questions its position on this issue”.