Scottish first minister said the occasion will live long in the memory, and they believed it 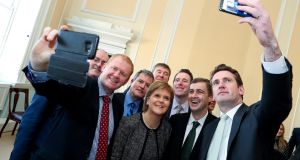 Nicola Sturgeon with her fans: the politicians swarmed around their guest trying to position their phones while simultaneously elbowing colleagues out of the way. Photograph: Maxwells

There was a very touching end to Nicola Sturgeon’s morale-boosting Seanad visit.

Starstruck Senators fell over each other as they battled to take selfies with their famous visitor.

Now we know how it must be for Justin Bieber.

Luckily for the frantic Senators, Sturgeon was very gracious. Bieber might have lashed out.

Members of the Upper House didn’t stand on dignity when the Scottish first minister was leaving the chamber. As soon as she neared the exit, Senators – who stood and applauded as she passed by – began to stampede. As pressure built up from behind, the diminutive politician and her group were shot through the door like champagne corks.

In an anteroom, the politicians swarmed around their guest trying to position their phones while simultaneously elbowing colleagues out of the way.

Earlier, there had been a lot of talk of gender equality and the importance of encouraging women to come into politics. It didn’t cut much ice when Sturgeon – a celebrity – arrived on the scene.

The women didn’t get a look in as the men employed vicious blocking moves around their prize. Then the Sinn Féin group moved in on her.

It was all slightly mortifying. But Nicola seemed to enjoy it.

Then, when the lads got their photographs they waited outside at the stairs, as if to form a guard of honour.

“Would you look at all of them, fan-girling like that,” sneered one of the lads, peering at the throng of women happily assailing their heroine. You wouldn’t catch us behaving like that, was the implication.

We had to remind the fan-boys of their actions.

“Fair enough, we probably did shove them out of the way.”

Jerry Buttimer, the Fine Gael Leader of the House, couldn’t have been happier. Not only did he have a proper VIP in the Seanad (it’s usually grumpy Ministers who can’t find a junior to fill in or Enda on an occasional trip to talk down to them) but he was also wearing a new gold tie from the Donald Trump range, no less. Life doesn’t get any better.

The touching part of all of this was the Senators’ delight at being the centre of attention. And knowing they had a significant political personage calling on them, and not that shower across the landing in the Dáil who get everything.

So the Seanad had its “first serving head of government” addressing them in their chamber.

They couldn’t stop saying it was “historic”. And indeed it was – they didn’t ramble when their turn came to speak. They asked their questions in under a minute and sat down. Can Nicola visit every week?

Cathaoirleach Denis O’Donovan went so far as to thank Senators for being so “obedient and succinct”. He was so happy he began to wax lovingly about the hearing the corncrake’s lullaby when he was a little boy.

“I urge the first minister to protect the corncrake in rural Scotland, ” he quivered.

Sturgeon is a commanding politician of real stature. In her speech, which pressed all the buttons on ancient ties and shared values, she took in a wide range of issues, from to Brexit, to the refugee crisis, alcohol legislation and Scottish independence. With the obligatory Seamus Heaney quote along the way.

“We are all Celts,” repeated the red-bearded James Reilly, like he fancied a role in Game of Thrones.

“She leaves us in the dust when it comes to equality in Cabinet. The day after her election as first minister, she unveiled her first Cabinet with a 50-50 gender balance. Without a doubt, it was a very brave decision.”

Or maybe just the right one.

The smitten McDowell got the ball rolling on the subject of independence for Scotland. “On behalf of myself and most members here, if not on behalf of everyone, I wholly and unambiguously support Scotland’s movement for national independence,” he declared.

There was a gasp from the UK ambassador who was sitting behind us in the gallery. Actually, there wasn’t.

There was deluge of support for independence.

“What can Ireland do to help Scotland achieve its full potential and independence? How can we be of assistance to Scotland?” cried Fianna Fáil’s Mark Daly.

“Scotland gave us two iconic revolutionaries in James Connolly and Margaret Skinnider, who in no small way, along with others, shaped Ireland over the past century in our struggle for national independence.”

Skinnider and Connolly also got a shout-out form Alice Mary Higgins, who also noted the “practical solidarity which Scotland has offered to women from Northern Ireland in supporting their access to reproductive health services”.

Emotional Aodhan was next. The former Labour TD trilled “I find it inspiring to be in the First Minister’s presence today” he said of this “shining light” of the world. “When I hear you speak, I am actually inspired.”

Probably just as well they didn’t stress it was the Senators, whose opinions yesterday made little impact in the Dáil or further afield.

Finally, just to show what a good politician she is, Sturgeon thanked her hosts and glowingly declared: “It is a historic occasion that will live with me for the rest of my life.”

And they believed her.

One Senator held up her phone in the chamber and snapped the leader of the SNP as she spoke. Taking photographs inside Leinster House is strictly forbidden.

“The floor in that room is close to collapse. They’re lucky they haven’t gone through it.”

But they were happy.