Minister’s comments about cost of Seanad ‘an absolute lie’

Using people with disabilities as part of abolition campaign an ‘insult’, Seanad told 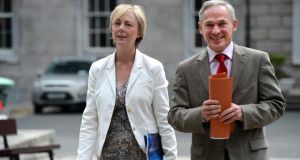 Minister for Jobs Richard Bruton has been accused of lying over his assertion that abolishing the Seanad would save €20 million a year and €100 million over a five-year Dáil term.

Mr Bruton was also accused of “ignorance” and his statement on the issue was compared to Nazi propaganda.

Senators were equally critical of his remarks that the money could instead be spent on people with disabilities.

David Norris (Ind) said they had to listen to “the Regina monologue from someone who’s not a wet weekend in the House and she’s talking through her fanny”.

He demanded a report be put before the Seanad before 7pm tomorrow, with a breakdown of how the €20 million a year could be saved. Final stages of debate take place then on the Bill to abolish the Seanad.

Mr Mulcahy said “figures cannot be fired around flippantly” and he was “absolutely livid” at the Minister’s comments. “Today’s statement is an absolute lie,” he said.

Mary White (FF) compared Mr Bruton’s comments to “propaganda from Hitler”. She said Mr Bruton had a responsibility not to tell lies and added: “These people are ignorant on their information on this Senate. It does not cost €20 million a year”.

Terry Leyden (FF) said Mr Bruton “should be bloody well busy enough trying to create jobs”. He described as “arrogance” the beginning of an abolition campaign when the legislation had not even been passed or signed by the President.

Martin Conway (FG) warned that if the Government continued to use people with disabilities in the abolition campaign “some of us might become actively involved in the matter”.

John Whelan (Lab) warned that if the Government wanted to run its full term if should start to respect the Seanad and Senators.