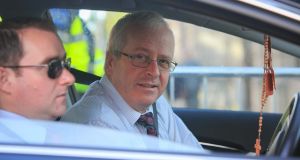 Independent TD Mattie McGrath has renewed his call for a land tax on purchases in excess of 750 acres. File photograph: Gareth Chaney/Collins

Independent TD Mattie McGrath has renewed his call for a tax on land purchases in excess of 750 acres, accusing conglomerates in the horse industry of “gobbling up” huge tracts of land.

Speaking during the Dáil debate on Budget 2017, Mr McGrath claimed that equine industry groups were buying up “vast areas of land in Tipperary, in Limerick and in the Midlands”.

Warning that “this land-grabbing has to stop”, he said that “we need a land commission, we need a tax that will stop [these groups] from pumping massive amounts . . . into thousands of acres of land”.

He said he believed a wealth tax should be imposed on land purchases in excess of 750 acres.

Mr McGrath said he saluted the equine industry for what it had achieved and the employment it provided.

However, he said their actions were preventing local farmers from being able to increase the viability of their farms by buying 10 or 20 acres of land adjoining their holdings.

“I do not need to mention the names of those involved. Everyone knows who they are. They have been well able to lecture us on how to run our businesses.”

He said the horse industry got tax breaks from the late former taoiseach Charles Haughey, which had been needed at the time to stimulate the industry.

However, Mr McGrath said: “We need a level playing field now to ensure fair play for all.

“These conglomerates move in with their cheque books and buy the land.

“In some cases, the land is purchased even before the ‘For Sale’ sign goes up. There are many banks, touts, auctioneers and so on involved in this murky business.

“We got rid of the landlords once but they are now back in a different guise,” he said, referring to British rule.

“We need farming families to be supported so that they can live with dignity and respect and participate in their communities.”