Taoiseach says he hopes and expects more people will pay 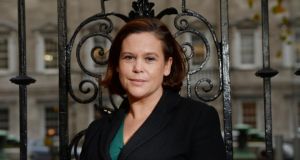 Mary Lou McDonald: “The Taoiseach and his cronies in government have stuck their hands in the pockets of working people. ” Photograph: Alan Betson/The Irish Times

People refusing to pay domestic water charges will still get €100 from the State, Fianna Fáil leader Micheál Martin has said.

“Why would one pay the water charge if one gets the €100 in any event?” he asked. “Those who have paid must be looking askance at the situation.”

Mr Martin and Sinn Féin deputy leader Mary Lou McDonald questioned Taoiseach Enda Kenny on the revelation that Irish Water collected less than half the revenue from the charges in the first three months of billing.

Mr Martin said the figures revealed the policy had failed. “After 14 U-turns on this entire saga, it is time to call a halt and to abolish the charges and this whole operation and edifice,’’ he said. “It is a moment of high farce that the Government has now landed us and it is time to go back to the drawing board and start afresh.’’

Mr Kenny said he very much thanked the 675,000 households who had paid the charges. “Deputy Martin is still taking the same line as he always did, namely, to leave things as they were within an official system, both for water and wastewater,’’ he said.

“The very fact that Irish Water has been set up . . . allows for the entity to be able to borrow and to invest to fix all the problems that exist and to provide a proper water system for this country for the next 20 to 50 years.’’

Mr Kenny said he hoped and expected more people would continue to pay the charges. He said they were very modest and were for a very good cause for all Irish people and the country for the coming years. Irish Water, he added, had now received 46 per cent of expected revenue, from 675,000 households representing two million people.

They were very fair and the Government had been quite clear water would not be cut off and people would not be sent to jail, he said.

Ms McDonald predicted the Taoiseach would be “sorely disappointed” if it was sincerely his hope more people would pay. “You have comprehensively failed to win the support of the people for the introduction of this charge,” she said. “What you have left them with is a quango of enormous proportions, controversies around consultancy fees and so on . . . “

Ms McDonald said this had been done against a background of endless austerity. “The Taoiseach and his cronies in government have stuck their hands in the pockets of working people,” she said.