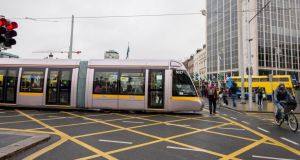 Almost 25 per cent more passengers have used the Luas green line since the Dublin tram system’s cross-city service opened, in December, the Minister for Transport has said. Shane Ross told the Dáil the 24 per cent rise was an extraordinary piece of good news and “demand is greater than supply”.

Responding to a Fianna Fáil motion critical of traffic congestion in Dublin city, Mr Ross said the Luas had become “a temporary victim of its own success’’; he acknowledged congestion’s impact on people’s lives and on the economy but said the Government continued to address underinvestment in integrated public transport over the past decade. Seven higher-capacity trams had been purchased and would be introduced over time, he said.

Fianna Fáil’s spokesman on Dublin, John Lahart, said Mr Ross had become the “minister for standstill” since the green line’s cross-city extension began operating. He said the longer trams had caused traffic chaos on the Liffey quays and across the city that “reflects on a number of Ministers and their departments”.

Mr Lahart said it was like being stranded on a desert island, with the Government sending a supertanker to the rescue when what were needed were speedboats. Dublin Bus journey times had increased by 110 per cent, he claimed.