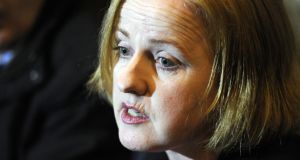 Ruth Coppinger TD, Socialist Party: In the Dáil she said gardaí and the courts were being used to “defend corporate interests and the establishment”. Photograph: Dave Meehan

Taoiseach Enda Kenny has rejected as outrageous and completely untrue allegations that the Garda Síochána is operating in a political fashion in dealing with water charges protests.

Mr Kenny found it “quite sinister” that some workers who were legitimately installing water meters were being told by Anti-Austerity Alliance people “who they are, where they live and that they should be very careful”.

He was responding during leaders’ questions from Ruth Coppinger (Socialist Party) who claimed the “Garda Síochána is operating in a political fashion that benefits the Government”, in the arrests over seven days of Tallaght residents.

She said she received a letter from a garda and quoted: “What is really bringing the gardaí into disrepute is not the water charge protesters, but the Government that is using us against them.”

She also quoted: “An Garda Síochána is paying a heavy prices for their role in the introduction of the water tax. We are losing credibility with the ordinary man and woman.”

Ms Coppinger said gardaí and the courts were being used to “defend corporate interests and the establishment . . . in the anti-water charge protests”. There was no other way to describe the policing of communities protesting against the installation of water meters, she said.

Mr Kenny described her comments as “outrageous” and said gardaí “do not operate to any mandate from any government and cannot do so”. To say the “Garda operated in a political fashion is completely without basis, false and untrue and the deputy knows better”.

Snow and ice warning for Connacht and Cavan and Donegal 13:57
Man injured in east Belfast gun attack 13:19
Dublin house deaths: woman still being treated in hospital 13:08
Negotiating trade deal in 10 months will be difficult – McEntee 12:42
Seamus Mallon tributes: Sharon Stone among those to sign book of condolence 11:09
SUBSCRIBER ONLY