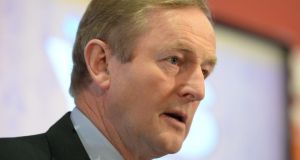 Taoiseach Enda Kenny who told the Dáil today too many families were still struggling to make ends meet or were out of work and too many families had relatives who had had to emigrate. Photograph: The Irish Times

Taoiseach Enda Kenny today pledged the phased abolition of the Universal Social Charge but admitted many people do not yet see or feel the benefit s of a recovering economy in their daily lives.

Mr Kenny pledged that in this October’s budget 500,000 people would no longer be subject to the universal social charge.

He said it was wrong the Government took more than half of every extra euro of pay increases from hundreds of thousands of workers.

This Government has begun and will now accelerate its phased abolition, he said. “In our first budget we removed 300,000 from USC and in last budget 80,000 were removed from liability for the charge.”

The recovery was incomplete but Ireland was the fastest growing economy in the EU, he added.

“Everybody remained nervous about the risks ahead and the dangers of slipping back.”

But he told the Dáil: “My commitment to the Irish people is that under this Government we are never going back.”

He said “job creation will remain our top priority because without job creation little else can be achieved”.

He said their plan set out four clear jobs targets and predicted more than 100,000 new jobs to be in place by the end of the year. Next year more people would return home, he added.

“Our plan will bring the country back to full employment. Everyone who wants a job will have a job,” he promised.

Mr Kenny said “our plan sees a steady growth of about 3.5 per cent and not boom or bust”.

Hitting out at the previous government the Taoiseach said Fianna Fáil leader Micheál Martin had yet to learn that public sector hikes without reform, a welfare system that perpetuated joblessness and poverty were unsustainable.

He stressed: “We are never going back to show time politics where budgets designed by focus groups destroyed our economy.”

In an apparent reference to Sinn Féin he said “the greatest threat to our economy comes not from Greece or Ukraine but from economic amnesia of some in this House”.

He hit out at “promises to reverse every tough decision” and described this as irresponsible, populist politics.

Paying tribute to nurses, doctors, gardaí and public sector workers, Mr Kenny he said the public service had been reduced by 10 per cent at a time when demand had increased. He linked pay awards to efficiencies and reform.