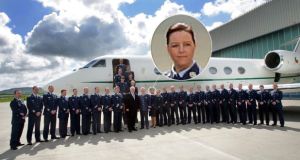 File photograph of Lisa Smith from Dundalk (to right of taoiseach and Chief of Staff) converted to Islam and moved to Syria. Photograph: Bryan O’Brien

A security assessment will be carried out to ensure that the Irishwoman who is an alleged Islamic State supporter is “not a threat to life and limb here in Ireland”, Taoiseach Leo Varadkar has told the Dáil.

Cabinet on Tuesday discussed the case of Lisa Smith (37), a former member of the Defence Forces from Dundalk, Co Louth, who travelled to northern Syria four years ago, where she married an Islamic State - also known as Isis - fighter who was later killed.

Mr Varadkar, speaking in the Dáil later, said of Ms Smith and her two-year-old daughter that “as is the case with all Irish citizens, they will be permitted to re-enter the State should they try to do so”.

But he dismissed as “absolutely without foundation” suggestions that the Government jet would be used to repatriate the woman and her daughter.

Mr Varadkar told Labour leader Brendan Howlin that efforts were being made to verify the details of reports that she is in a camp in an area of northern Syria controlled by Kurdish forces, and to make direct contact with her.

But he said the State’s capacity to provide consular support in a war zone was limited.

Mr Howlin asked about Government efforts to repatriate Ms Smith and her daughter to Ireland and how she would be treated once back in the State.

Mr Varadkar said he was “very conscious of the fact that while nobody can condone the choice that she has made and the actions that she took in aligning herself with Isis, a terrorist regime that is hell-bent on the destruction of the West and Christendom, she does have a two-year-old child that is an Irish citizen and that child is an innocent child”.

He said that “a security assessment will have to be carried out to make sure that Lisa Marie Smith is not a threat to any of us.

“We are working out how best that can be done to make sure that she does not become a threat to life and limb here in Ireland. But that does not apply obviously to a two-year-old child.”

Referring to the Government jet, which Ms Smith used to work on as a steward when she was a member of the Defence Forces, Mr Varadkar said the Government jet was not used to repatriate citizens and could not fly as far as Syria or Turkey.

Mr Varadkar referred to reports that she was in a Kurdish-controlled camp in northern Syria and that she had been interviewed by CNN at the weekend.

They were trying to confirm details and make direct contact with her but he said that while consular assistance was provided if requested to all Irish citizens abroad, “our capacity to do so in an active war zone is limited”.

“Nonetheless, I am aware of the vulnerability of the two-year-old child in these circumstances and the safety and welfare of Irish citizens is a priority for the consular service and the Government.

“This applies to the case in question, where two Irish citizens are in high risk locations and wish to leave.”