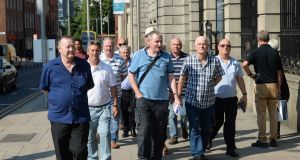 A group of abuse victims pictured outside the Dáil on Wednesday to mark a motion on reforms to a State abuse redress scheme. Photograph: Dara Mac Dónaill/The Irish Times

The Government has been defeated by 84 votes to 44 on a Dáil motion to allow victims of primary school sexual abuse to seek redress on the same basis as victims of residential institutional abuse.

The Government had opposed the Fianna Fáil motion, which was introduced by social protection spokesman Willie O’Dea for victims of primary school abuse where the perpetrators have been identified and convicted.

The motion sought to amend the State ex-gratia redress scheme set up after Louise O’Keeffe won her European Court of Human Rights case in 2014, to include victims in these cases who cannot prove a prior complaint.

Mr O’ Dea said the issue would involve a maximum payout of €15 million and he described the Government’s attitude as “coldly adversarial”.

If the Government had learnt anything from the cervical cancer scandal, he said, “it will surely realise at this late stage that that sort of attitude to helpless victims is repugnant to the majority of the Irish people”.

Mr O’Dea referred to the case of John Allen, who was abused aged nine in North Monastery primary school in Cork. When the perpetrator of the abuse was brought to court years later, Mr Allen asked the judge not to imprison the defendant and this was agreed to.

The Limerick TD said: “I hope for John’s sake that Shakespeare was right when he said the giving of mercy benefits those who give as well as those who take, because John Allen and his fellow survivors have got damn all mercy from this State.”

Minister for Education Richard Bruton said that “there is no desire on the part of the State not to pay out in a case where the circumstances are similar to those found in the judgment in the Louise O’Keeffe case”.

Mr Bruton said that was the reason he had appointed independent former High Court judge Iarfhlaith O Neill to review the scheme and they should wait for that report.

The Minister added that Fianna Fáil wanted the State to set up a scheme purely for those who were victims of convicted abusers.

“Essentially the motion states that compensation should be paid to certain victims but not to others,” he said.

Mr O’Dea said that was a “deliberate distortion of the truth”.

Mr Bruton said his advice was that it would breach constitutional provisions on equality by seeking to treat one group of victims differently from people who are in similar circumstances.