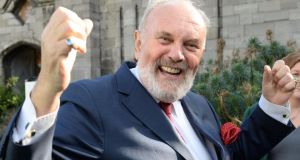 Senator David Norris: “Nothing could demonstrate more clearly that the Government proposes to invade these seats.” Photograph: Dara Mac Dónaill


The Government has been accused of preparing for political parties to “invade” the six Seanad’s university seats via its legislation to extend the vote to all colleges.

Trinity College Senator David Norris said this was quite clear in remarks by Minister for the Environment and Local Government Phil Hogan that provision would be made for an alternative arrangement for the filling of casual vacancies on the “replacement candidates list” system that operates for the European parliament elections.

“Nothing could demonstrate more clearly that the Government proposes to invade these seats,” said Mr Norris.

He was speaking during a Seanad debate on the General Scheme of the Seanad Electoral (University Members) (Amendment) Bill, under which 800,000 college students would be eligible to vote for the university panels.

Mr Norris said “of the 60 Seanad seats we will have 800,000 people electing six members, 1,000 electing 43 and one person electing 11. Is that what the Minister calls democracy?”


‘Revenge’
Trinity College Senator Seán Barrett said the Taoiseach refused to debate the issue of the Seanad before the referendum and because he lost it “he is now to seek revenge on the Independents”.

Taoiseach’s appointee Katherine Zappone saw the legislation as the start of opening up the Seanad to make it more inclusive but she asked why it was not opening up the Upper House to universal franchise.