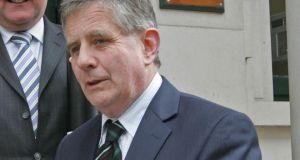 Senator Sean Barrett said “a single page was all that appeared in the Oireachtas Library about the sale of Aer Lingus”. Photograph: Eric Luke

Concerns have been raised about the lack of cost-benefit analysis of key public projects.

Economist and Independent Senator Sean Barrett said there were three cases “I am worried about” in terms of value for public money – the sale of Aer Lingus, the new €27 million post-code system and electricity generation.

He said “a single page was all that appeared in the Oireachtas Library about the sale of Aer Lingus” and “this is inadequate”.

He also referred to the €27 million introduced of a seven-digit non-sequential address for every house in the country. He had seen no cost-benefit analysis on its introduction but “I note that time the President had to consider such a proposal...was reduced when the Government invoked article 25.2.2 of the Constitution to require that legislation to be signed on a date earlier than the fifth day after the Bill was presented to the President”.

He also raised the issue of electricity generation and whether “it is the correct solution to generate electricity for Northern Ireland within that territory, for example in Derry or in Larne, or is it correct to generate it in the South”.

“How much does one lose if the transmission is overhead on pylons or underground? I believe that numbers in this regard would help.”

The Senator said the Government needed to make more use of the Irish Government Economic and Evaluation Service, and he questioned why the Departments of Enterprise and of Education were not included in its remit when they had 18 per cent of overall spend.

He said the Comptroller & Auditor General should liaise with the evaluation service “because sometimes the comptroller only turns up after the mishap has happened”.