Opinion: The Government deserves the odium that it will incur with a defeat 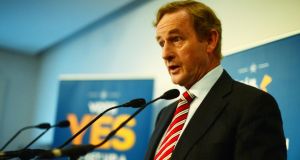 Taoiseach Enda Kenny has been in the Dáil since 1975 and for 35 years had almost nothing to say about the Seanad. Photograph: Bryan O’Brien / The Irish Times

It matters only a bit whether the Seanad stays or goes but it matters quite a bit which way you vote in this referendum. For if this Government gets away with the relentless cynicism that has marked its campaign, right from its outset four years ago, then more damage will have been done to the status of politics here than for a long time.

It was Enda Kenny who came up with the proposal to abolish the Seanad, after, we are told, careful evaluation of the usefulness of second parliamentary chambers in small states. This, apparently, persuaded him we didn’t need the Seanad here. So persuaded is he that he refuses to persuade the rest of us by engaging in public debate on television with opponents of the idea; refuses to tell us how a few months before he proposed the abolition of the Seanad he had argued for its retention and reform; and refuses to explain the curious coincidence of the timing in November 2009 of his headline-grabbing abolition proposal with a crisis of his leadership of Fine Gael.

Dáil debate is an oxymoron
His handlers’ claim that he has debated the issues repeatedly in Dáil Éireann is false. Dáil debate is an oxymoron. On television he would be required to deal with opposing arguments and questions – his busy handlers clearly deem him incapable of defending the proposition he himself instigated, or explaining his sudden volte face in November 2009.

The abolition proposition is presented as part of a political reform package. There is nothing at all in that package that deals even remotely with the central issue of the accountability of government to parliament. That accountability is frustrated with the rigid application of the whip system – the requirement, under pain of expulsion and the prospect of career ruination, to vote for and otherwise support whatever the government proposes. This system contributed handsomely to the unaccountability of governments since 2002 on the policies that drove the crisis. But, it seems, we have learned nothing – the integrity of this iniquitous system is carefully preserved in the programme of political “reform”. A vote for that piece of cynicism is a vote to continue as we are.

The Fine Gael website claims abolishing the Seanad would save €20 million a year; only 1 per cent of the population elect the Seanad; Ireland is the only country in Europe of our size with two chambers of parliament; 10 reports have been published on Seanad reform and no significant reform has even been implemented; that the Seanad sat only 110 days last year.

The claim that there would be €20 million saving has been debunked by the finance officer of the Oireachtas. Less than half that (€8.8 million) are direct costs; the remainder might be saved in time or might not. The Government, which, notoriously, has failed to control health costs, for instance, claims it will save all the indirect costs forthwith!

That 1 per cent of the population elect the Seanad is entirely (unfortunately) within the control of the Government, which could legislate for 43 of the 60 seats to be directly elected by all the people eligible to vote.

Ireland is the only small European state with two parliamentary chambers, but so what? If, for instance, Denmark’s political system is to be emulated, then how about a fairer electoral system and the decisive minority” arrangement, whereby a minority of parliament can demand an investigation into any government programme or action?

Nothing to say about the Seanad
Yes, 10 reports have been published on Seanad reform and no significant reform has even been implemented, but whose fault is that? The Seanad had no power to reform itself. Labour has been in government for 15 years in the last 40 and Fine Gael in government for 13 years. They had lots of time to reform the Seanad but didn’t bother. Enda Kenny has been in the Dáil since 1975 and for 35 years had nothing at all to say about the Seanad (or indeed almost anything else).

There are two other insidious elements to the Government’s campaign. First. the denigration of politicians , as through people engaged in the representation of the people were either a luxury or a menace. Second, that in the event that the referendum on the abolition of the Seanad is defeated, the Government will adamantly refuse to initiate reform or even facilitate it. This is more cynical than anything I can remember Fianna Fáil doing in 50 years – and that is saying something!

The Government deserves the odium that it will incur with a defeat. Go for it!

PS Vote for a Court of Appeal.