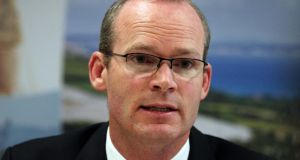 Minister for Defence Simon Coveney said the overall defence budget of €897 million and the budgetary process were about “stopping the cuts and maintaining expenditure into next year”. Photograph: Collins

A draft White Paper setting out defence policy for the next decade is expected before the end of the year, Minister for Defence Simon Coveney told the Dáil yesterday.

Mr Coveney also announced plans to take on 180 recruits by the end of the year along with the 220 currently in training. Another 37 cadets have also started training, as have 15 apprentice aircraft technicians for the Air Corps.

During the ongoing Dáil debate on Budget 2015, he said he hoped to start a consultation process on the draft of the White Paper early next year. “This should allow us to finalise the White Paper, a document that will essentially set defence policy for the next 10 years.”

Mr Coveney said the overall defence budget of €897 million and the budgetary process were about “stopping the cuts and maintaining expenditure into next year”.

He said that “my ambition is to see an increasing defence budget in future to ensure we can fulfil all the roles the Defence Forces will be obliged to fulfil in the context of the new policy vision”.

The €897 million budget includes €676 million to run the department and Defence Forces and €221 million for army pensions.

Funding includes provision for a third patrol vessel for the Naval Service, to be bought at 2012 prices.

He also noted significant reform of the Reserve Defence Forces, wherein Army units will now have permanent and reserve personnel, instead of a separate stand-along reserve force.