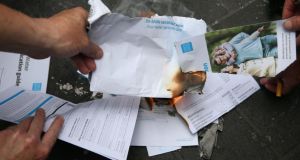 Protesters burn their water bills during a protest against the charges on O’Connell Street in Dublin last month. Photograph: Brian Lawless/PA Wire.

Controversial legal changes to ensure householders pay their water charges have been passed in the Dáil by 63 votes to 34 after the Opposition called for a walk-through vote.

After the first electronic vote, TDs had to walk through the ’Tá’ and ’Níl’ lobbies to cast their vote “by means other than electronic”.

After nine-and-a-half hours of debate on Thursday and several hours on Wednesday the legislation was passed.

The Opposition also called two quorums, which obliges the Government side to ensure 20 TDs are in the House.

For much of the debate, about half a dozen TDs were present including a number of Independents and environment spokespeople for the political parties.

The Government amendments included provisions to ensure no home can be sold until all water charges have been paid.

The legislation also provides for the creation of a database of applicants for the €100 water conservation grant and it obliges local authority tenants to make water charge payments.

TDs also accepted amendments related to the original provisions of the Bill on waste collection and on-the-spot fines of €500 for waste collectors who breach the conditions of their permit.