Call for Taoiseach to act by Friday to secure Halawa release 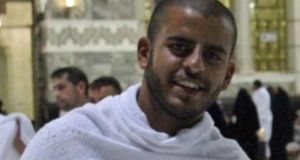 Ibrahim Halawa: Arrested in August 2013, his trial has been adjourned 16 times.

Taoiseach Enda Kenny has two days to apply to the Egyptian government for the release of Ibrahim Halawa through a special commission, the Dáil has heard.

AAA-PBP TD Bríd Smith said on Wednesday “there is a window of opportunity over the next two days”.

Mr Kenny said he wrote again to the Egyptian president in the past two days and “we will pursue this matter further through the ambassadors”.

Ceann Comhairle Seán Ó Fearghaíl said that he had received an invitation on Tuesday from the speaker of the Egyptian parliament requesting a visit by a delegation from these Houses.

The Dáil agreed a motion in July to send a cross-party delegation to Cairo on behalf of the 21-year-old Irish citizen who has been imprisoned in Egypt for more than three years following his arrest during protests in the capital in August 2013. His trial has been adjourned 16 times.

Ms Smith said Mr Kenny had until November 25th to apply to a special commission established by the Egyptian government “to have Ibrahim Halawa released on the basis that he is a young person who has not been convicted”.

She appealed for direct intervention by the Taoiseach and for him to apply under his own name using Egyptian law 140 for the deportation of Mr Halawa.

Ms Smith said the Taoiseach should not just support the rule 140 position. “What he needs to do is apply in his own name for rule 140 to apply to Ibrahim Halawa.”

The Dublin South-Central TD stressed that “if el-Sisi’s government sees an application that does not state ‘the Irish Government’ but something else, it will not be taken as seriously as it should be”.

Mr Kenny said “the Government backs the rule 140 arrangement. It is not just an individual.”

The Taoiseach said Minister for Foreign Affairs Charlie Flanagan “has had more extensive discussions about the release of Ibrahim Halawa than about any other Irish national. He will continue to do so until we secure Ibrahim’s release.”

Sinn Féin leader Gerry Adams noted that 859 prisoners had been pardoned by the Egyptian government under article 155 of the Egyptian constitution and he asked if the Taoiseach had spoken to Egypt’s president.

Mr Kenny reiterated that he had written to the president “to whom we have made a number of calls”. He said Mr Flanagan had spoken to the ambassador and “I intend to follow up on the matter”.