Noonan insists figures for Fine Gael plans do add up 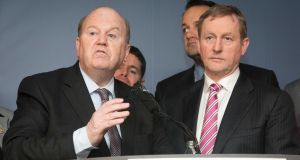 Mr Noonan has come under scrutiny for his claim the fiscal space – the resources for tax cuts and spending increases over the next five years – is worth €12 billion.

The Minister said the money available is down to the policies Fine Gael and Labour committed to and “chapter and verse” of the plan will be unveiled on Thursday.

He was speaking at an event for Fine Gael candidates and supporters at the Alexander Hotel in Dublin following the start of the general election on Wednesday.

Mr Noonan said: “The problem with the Opposition’s position is they opposed everything we did when we were putting these policies in place.

“They voted against them all of the time. Now they are very brave and they are going to spend the money these policies have generated and they are committed to changing the policies.

“When they change the policies they will not get the resources . . . the Sinn Féin formula will destroy the economy.

“You won’t get the growth, you won’t get the economy and you won’t get the resources and yet they are committing to spend so you will have another fiscal crisis after a couple of years and our deficits will grow towards 7 per cent again.” Mr Noonan was speaking as Fine Gael launched its election campaign.

Taoiseach Enda Kenny said voters have a clear choice ahead of them in the general election campaign.

He said voters should not go back to political parties that wrecked the economy or those who could destroy the recovery.

Addressing party candidates Mr Kenny said now was not the time to gamble with a recovery that was still fragile.

The Taoiseach said his party is clear there would be no return to boom and bust politics.