‘Nobody believes’ IRA has gone away - Charlie Flanagan 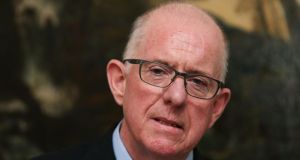 Minister for Foreign Affairs Charlie Flanagan has said “nobody believes the IRA has disbanded and gone away”.

Mr Flanagan was responding to Sinn Féin leader Gerry Adams, who on Tuesday said the IRA had gone away and accused the Government of playing politics with issues arising from the killings of Jock Davison and Kevin McGuigan in Belfast.

Mr Flanagan’s comments, in an interview with The Irish Times, reflect Government sentiment that Sinn Féin must now deal with the issue in a more expansive way than by issuing denials.

Mr Flanagan later put his view into context by saying he accepted the IRA was no longer active as a paramilitary organisation threatening the State.

“It’s important that the entirety of the statement be taken into account,” he said. “He did acknowledge the commitment of Sinn Féin to the peace process and in its co-operation in relation to policing.”

Mr Flanagan hinted a possible new monitoring commission he discussed with Northern Secretary Theresa Villiers at a meeting in Dublin on Tuesday might have a role looking at such issues.

“I believe there is an obligation on [Sinn Féin’s] part to act, by deed, on their calls on those with information to co-operate with the PSNI. They can follow those calls by active deeds.”

Earlier, Taoiseach Enda Kenny had an early morning meeting to discuss the issues arising from the controversy. It was attended by Tánaiste Joan Burton, Mr Flanagan, Minister for Justice Frances Fitzgerald and Garda Commissioner Nóirín O’Sullivan.

Asked afterwards about his own view of the threat posed by the IRA, Mr Kenny said it was clear from Mr Hamilton’s remarks that IRA members remained involved in criminality, but not terrorist activity.

“Clearly people who were involved in the Provisional IRA have drifted into criminality of one sort or another,” he said.