No side say they are open to second referendum 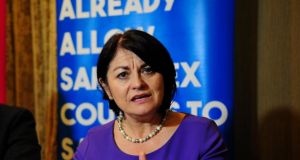 Independent Senator Fidelma Healy Eames at a press conference organised by the No side in the same-sex marriage referendum. Photograph: Aidan Crawley/The Irish Times

Campaigners for a No vote in Friday’s marriage referendum say they are open to having another vote to provide constitutional protection for same-sex couples that stops short of marriage.

Speaking at a press conference to wrap up the campaign, Galway-based Independent Senator Fidelma Healy Eames said another referendum is a possibility she would consider.

She said Friday’s referendum proposed to amend Article 41 of the Constitution, which deals with the family. She proposes that recognition could instead be given to same-sex couples through Article 40, which deals with personal rights.

Ms Healy Eames said: “We should be able to meet their needs and ensure they have constitutional protection, by voting No and sending this back to the Government to redraft and to have their needs met under Article 40 on equality and personal rights.

“By not touching Article 41, the No side is happy.”

Ms Healy Eames said that while her proposal could be dealt with under legislation, she would be prepared for a second referendum.

“As long as I know that the birth parents piece is protected and the right to the mother and father is protected for the child, I am happy.

“ I just want to see that gay people get the constitutional protection they need as well. For themselves and their families. That is the equality that I think is needed. But in rushing to serve one, let’s not kill the other.”

David Quinn of the Iona Institute, who was also at the press conference, said a second referendum would deal “with a very different question, obviously”.

Independent TD Mattie McGrath criticised former president Mary McAleese for comments she made earlier this week, which he described as “intemperate and shocking”.

Mrs McAleese, whose son is gay, said her husband’s father “came to stay with us, and he at first would have been your regular bog-standard Irish Catholic grandad with an attitude to gay people”.

She said that in the company of gay people her father-in-law “just blossomed and he let go of all that bias and prejudice”.

Mr McGrath said: “I am very concerned about the former president’s intemperate language, where she described people as bog-standard Catholics, which is a shocking intervention.

“I am surprised at her intemperate and shocking language and her denigrating of ordinary Catholic people in Ireland, and Christian people. There are many faiths that are opposed to this issue.”

Mr Quinn said people on the No side had examined campaigns against same-sex marriage in other countries, as campaigners on the Yes side had done.

“People on the No side have basically been looking at how other campaigns were run in different countries,” said Mr Quinn.

“There was a campaign in Croatia, a campaign in Slovenia. In both cases, what you might call the male-female version of marriage won out.”

He also cited campaigns in the US, France and the UK.