No question of abortion on demand, insists Kenny 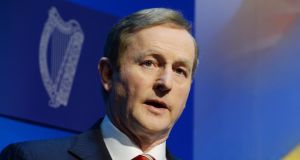 There is no question of abortion on demand through the Government’s latest legislation, Taoiseach Enda Kenny has said in the Dáil. Photograph: Alan Betson/The Irish Times

There is no question of abortion on demand through the Government’s latest legislation, Taoiseach Enda Kenny has said in the Dáil.

He told Sinn Féin leader Gerry Adams the Government is required to act “in accordance with the Constitution and in line with the X case”.

He said: “There is no question or intent in any circumstances for an opening for, as they say, for abortion on demand in this country.”

Mr Adams had criticised arguments that the legislation would open the floodgates or that it was the “thin end of the wedge”. He said this was “downright disrespectful to women and impossible in light of the legislation the Government is proposing”.

The Taoiseach agreed with the Louth TD that “many of the comments made have been disrespectful to women”.

He stressed that Fianna Fáil in government had held two referendums in the past on the issue and the electorate “made their opinion plain”. In those referendums the electorate voted against removing the risk of suicide as grounds for an abortion.

Asked about the timing of the legislation, he said the health committee would consider the issue and then he hoped the legislation would be introduced and enacted before the House rose for the summer. “I would hope that the Bill can be enacted and for the first time in 31 years, bring clarity and certainty to this area.”

She accused the Government of also ignoring the advice of an expert group that two doctors of relevant training and expertise would be sufficient to make a decision.

She was equally critical of Fine Gael backbenchers and their conscience on the issue of abortion. There was repeated heckling when she asked “where was that conscience when the rights of born children” were being infringed through the austerity cuts that had been imposed on families, which she said resulted in them being evicted and children going to school hungry.

“Now their obstructing of this legislation is being presented as the protection of the unborn,” she said. “I’m glad this legislation is before us but it is the absolute minimum”, she added, saying she believed the majority of Irish women seeking abortion would still continue to travel to Britain.

Mr Kenny said in response that Fine Gael backbenchers “are interested in all pieces of legislation before the House”.

The legislation, he added, was about saving women’s lives.