Opinion: Candidates embarking on a journey through unexplored territory 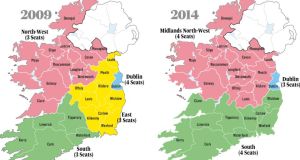 The official name for the one of Ireland’s three new European Parliament constituencies is Midlands-North-West. Few call it that. Instead, most people have plumped for a simpler description: Malin M50. It far more accurately describes the huge geographical span. It also captures perfectly its banality – an arbitrary line scrawled on a map.

At least the second constituency doesn’t involve a full intake of breath to pronounce. It is known as South but equally it has become colloquialised as the Mizen M50 constituency. It doesn’t take in quite as many counties (10 as opposed to 15 in Midlands-North-West). Yet, there is still the same ludicrous rationale underlying it: that an MEP from west Cork can somehow be seen as a geographical representative for a constituent living in Bray.

The third constituency is Dublin. It is the smallest with three seats but at least there is a coherence to it. It is the only one that fulfils the terms set out that “each constituency shall be composed of contiguous areas”, if that term is viewed as something more than a simple map-drawing exercise.

With each enlargement of the European Union over the past quarter century has come a reduction in the number of MEPs that represent this State. And over successive elections that has meant fewer constituencies, with the result that – with the exception of Dublin – the notion that the constituencies represent a geographical area (with any political or historical coherence) have become increasingly meaningless.

Thirty-five years ago Ireland’s representation was 15 and it allowed four constituencies that at least mirrored (partly) the four provinces. Munster had five seats, Dublin had four, Leinster had three, as did Connaught-Ulster (the population of which was too sparse to justify separate entities).

As the number of MEPs has been whittled down, so has the concept of contiguity become looser and looser. Once the number of Irish MEPs was reduced to 11, we have entered into the realm of the very, very tenuous when it comes to rationality. There’s something that’s very odd about the yoking together of Dublin’s outer suburbs with Irish-speaking fishing communities in Galway, Mayo and Donegal.

What’s going to happen next time? Midlands-North-West with Carlow-Kilkenny thrown in for good measure? The new constituency of Southern Ireland plus Dún Laoghaire-Rathdown?

Blame for this does not lie with the committee on European Parliament constituencies, chaired by Mr Justice John Cooke, which reported last year. Its terms of reference were specific and laid down by the Electoral Act 1997. And those terms, in the context of 11 seats, contain a logic that comes straight out of Lewis Carroll’s Alice in Wonderland . To follow its logic leads to absurdity and contradiction – a little like the King telling the Hatter: “Give your evidence and don’t be nervous or I’ll have you executed on the spot.”

The committee was confined to constituencies of three, four or five members. Breaching county boundaries was to be avoided if possible and there were references to contiguity (map contiguity as opposed to historical contiguity). The committee also had to have regard to “geographic considerations”. That is an imprecise term and is open to very broad interpretation.

The main constraint was undoubtedly the maximum number of MEPs per constituency. It left a very limited number of configurations, none of which was anywhere close to ideal. The committee received 24 submissions from parties, groups and individuals before drawing up its recommendations. The main variants were arguments for one five-seater, with two-three seaters.

A handful of those argued for a five-seat constituency that took in Dublin and the commuter belt along the east coast. But that kind of division could have been perceived as a throwback to a less desirable historical divide, that of the Pale. It would also have meant two very spread-out rural constituencies each with only three seats. There would have been complaints of comparative weakness and unequal treatment if that avenue had been pursued.

What has been left is a bit of a muddle. Candidates have already embarked on the campaign with the uncertainty of ordnance sappers journeying into unmapped and unexplored territory.

It is certainly true that when compared to some other EU countries there is a shared track record when it comes to constituencies that make little historical or geographical sense.

A core problem with the thinking behind the Electoral Acts as they apply to European constituencies is that they are regarded and treated as some kind of extension of the Dáil. Thus the restrictions on the numbers of seats and the obsession with county boundaries.

When we have a recurring debate about the “disconnect” between citizens and the European institutions, the crudity of the constituencies outside Dublin will do nothing to encourage a sense of belonging or relevance.

There is one solution that would resolve this haphazard arrangement. It was suggested by the Green Party at the submission stage but could not be entertained, because it fell outside the terms of reference. That was to make the whole of the State into one 11-seat constituency. Such a scenario could have a transformative effect. The constituency would have a coherent nature. It would encourage national and European-level debate rather than localism.

They would represent Ireland, not a hodgepodge of counties. It would favour ideas. It would be quite distinct in all respects from a Dáil election. And, of course, the way elections go, there would still be a good geographical spread.

Northern Ireland, Scotland and Wales are single constituencies for the purpose of European elections. Would it not be more sensible for Ireland to follow suit? We could even come up with a name for it – Malin-Mizen.


Harry McGee is Political Correspondent of The Irish Times

These were no ordinary candidates – these were junior ministerial candidates