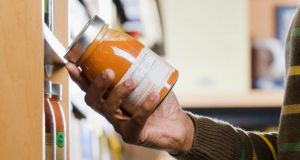 Clearly identified: The guidelines set out how produce from Israeli settlements in the occupied West Bank, which are illegal under international law, should be labelled if they are sold in the EU. Photograph: Thinkstock

The Department of Foreign Affairs has contacted all Government departments asking them to publicise new European Union guidelines for labelling products made in Israeli settlements.

The guidelines, published last month, set out how farm produce and other goods from Israeli settlements in the occupied West Bank, which are illegal under international law, should be labelled if they are sold in the EU. While the European Commission presented them as a clarification of existing policy, the guidelines were widely seen as a way of applying political pressure on Israel, which had fiercely opposed them.

To that end, the secretary general of the Department of Foreign Affairs has written to the heads of all Government departments asking them to bring the guidelines to the attention of relevant bodies dealing with labelling or consumer protection. The advisory notice will also be posted on the website of the Department of Foreign Affairs, a spokeswoman said.

Minister for Foreign Affairs Charlie Flanagan welcomed the publication of the guidelines, saying it was a move he had pressed for and supported. “It is a continuation of the ongoing policy of differentiating the EU’s relationship with Israel, from the relationship with Occupied Territories,” he said.

Last month the Israeli newspaper Yedioth Ahronoth reported that as part of Israel’s diplomatic response to the EU decision, Irish Ambassador Alison Kelly would be summoned to the foreign ministry and told that any meetings she planned for herself or visiting Irish officials would be restricted to low-tier diplomats.

Similar measures would be taken against all 16 EU states that urged the EU to adopt the guidelines, it reported.