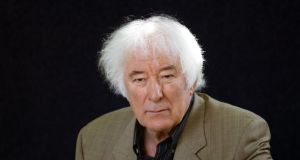 It is understood that LÉ Seamus Heaney has been considered in military circles, subject to the agreement of the late Nobel laureate’s family. Photograph: Marco Secchi/Getty Images

What’s in a name? Quite a lot if you are Minister for Defence and you have just decided to purchase a third new Naval Service offshore patrol vessel.

Taoiseach Enda Kenny, holding the Defence portfolio since Alan Shatter’s resignation, confirmed yesterday that the Government would buy a third naval ship under an option offered by the British builders holding the fleet renewal contract.

The new ship will be “identical to the recently commissioned LÉ Samuel Beckett and the currently under-construction LÉ James Joyce”, Mr Kenny said, and would be delivered possibly in time for the Easter Rising centenary in 2016.

The shipyard, Babcock Marine, has offered the third vessel at 2012 prices – €54 million – and so it would be “cost effective”, the Department of Defence said.

Film-maker Neil Jordan said he would organise a “roll call” of writers and artists who “will refuse to have weaponised naval systems named after them”, while writer Julian Gough recently pointed out in this newspaper that Beckett’s works were still banned here in the 1960s.

Stephen Joyce is also understood to have written to Mr Shatter in protest at the selection of his grandfather James Joyce’s name for the second new vessel, due for delivery next year.

Gough also noted the State refused Nora Barnacle’s request to have her husband’s body repatriated after Joyce’s death in Zurich in 1941.

However, it says there has been no decision on a name for the third ship.

It is understood that LÉ Seamus Heaney has been considered in military circles, subject to the agreement of the late Nobel laureate’s family.

Mr Kenny might return to previous protocol and opt for LÉ Fionnuala, which is his wife’s name.

“We’d just have to make sure the guns were pointing in the right direction this time though,” one defence source quipped.