Opinion: Interest costs are an enormous drain on our limited resources 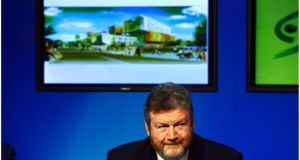 We are currently spending the price of 17 children’s hospitals annually on paying interest on our debt. Photograph: Bryan O’Brien

It’s surprising how little attention is given to the need to pay down Ireland’s national debt. Possibly that’s because we think it’s really our children’s problem.

Ireland’s official government debt was about €190 billion at the end of 2012. If the Government achieves its target of a 3 per cent deficit in 2015, the debt at the end of that year will be about €210 billion, excluding the huge bank debts and pension debts.

If Ireland manages in the next couple of years to get its annual tax income to match its non-interest expenditure (ie to achieve a nil “primary budget” deficit), and to keep it that way, even then our total debts will rise by about €10 billion per annum forever (assuming a blended interest rate of 4.5 per cent on the official debt, and not counting interest on bank and pension debts).

Assuming Ireland will never default on its debt (to institutional lenders or to local pensioners), Irish citizens are going to have to pay it. We surely have to start getting used to that idea, and begin talking about how we will do it and when. We need to recognise that by beginning to reduce the State’s debts we will start to make real savings for the benefit of our society.

A one-off debt reduction of €3 billion would cut the State’s annual interest costs by more than €100 million forever. If Ireland ran a budget surplus of €3 billion per annum every year, then – with the effect of compounding – the State’s debts would be reduced by €38 billion after 10 years and our annual interest costs would be €1,700 million lower.

The interest costs are the real killer. We are currently pouring 20 per cent of tax revenues – €8,500 million per annum – down the drain in interest costs, enough for 17 new children’s hospitals. Put another way, an average full-time worker pays €450 a month in taxes to pay interest on debt.

Debt prayer
Yet there has been almost no discussion of how, or even whether, to reduce the State’s debts (other than the perennial prayer for debt forgiveness). There is debate, of course, about how to slow the rate of increase to the 3 per cent level targeted for 2015. But nobody seems interested in getting beyond that level. And it’s not clear that Ireland would have chosen even to aim for that level if it had not been required by its troika of rescue lenders.

Just as for a company, it’s essential that a state generates enough surplus to service its debts. If it wants to borrow, it needs to be able to pay back. And if it starts to look like it can’t, it needs to get on top of the problem.

Over a period of a few years, a country’s books need to balance, unless its people are happy to create a financial problem for their children (and lenders are happy to finance that selfishness).

Ireland can now afford about €50 billion per annum for public services, healthcare, social welfare and other State expenditure, on average over a few years. That’s how much the exchequer raises from taxpayers and other sources every year, less what goes to pay interest. If our interest bill were lower, the country could then afford to spend correspondingly more on services.

Expenditure examined
But Ireland’s interest cost is going to keep rising so long as the debt keeps rising, so our children’s country is going to be able to afford to spend that much less. Reducing the State’s debts requires more focus, and a much more rigorous assessment of expenditure. Certainly, all expenditure proposals should be reviewed in respect of their impact on the country’s future debt levels. Projects whose costs exceed the revenue they generate for the exchequer over a few years must surely have a very compelling benefit to society to justify the financial encumbrance they place on our children.

When a billion euro of Government money is used to pay down the national debt, we know with a high degree of certainty that this will save the Irish taxpayer €40-€50 million each year forever. When the same funds are instead invested in domestic “shovel-ready” projects, it is highly likely that the risk-weighted returns to the exchequer from all sources will be much lower.

While Ireland owns many saleable and valuable assets, shouldn’t the Government be required to justify their retention by a rigorous comparison of the concrete benefits to society of that ownership relative to the clear, immediate and perpetual financial benefits of their sale?

There are enough examples around the world of what happens when countries and municipalities allow their debts to reach unsustainable levels. Ireland can hope it continues to be different from them. But the current strategy seems to leave a lot to luck: hopefully, creditors will keep lending to us, and hopefully our children will work out a better way of dealing with the problem.