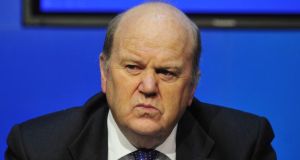 Minister for Finance Michael Noonan has also said the mortgage proposals from the Central Bank should be softened. Photograph: Aidan Crawley

The National Economic and Social Council report on home ownership and rental, published today, also says younger adults looking to set up a home near centres of employment, among other social groups, will find it far more difficult to purchase their own homes.

The report, titled Home Ownership and Rental: What Road is Ireland On?, examines housing policy in Ireland and how it may develop in the future.

It says new proposals from the Central Bank will be particularly hard on those renting in cities while saving for their own home.

The report says the proposals are “likely to cause some difficulty” for first time buyers, “particularly if they have to rent accommodation in a large urban area while saving a deposit”.

“To buy a €200,000 dwelling, a first-time buyer would need to save €40,000,” it says, while adding the income limit rations “should help to sustain affordability in housing prices”.

The report also says that even though rental and property prices are increasing, “purchasing is now less expensive than renting, based on a 30-year mortgage, in most parts of the country”.