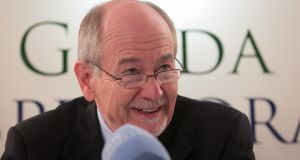 Bob Olson, chief inspector of the Garda Siochana Inspectorate: he also acknowledged “that some of the criticisms are not unique to An Garda Síochána, they are present in many other police forces around the world”. Photograph: Cyril Byrne/The Irish Times

The Garda Inspectorate report presented a “significant opportunity” to reform the force and is a “devastating critique” of the systems operated by An Garda Síochána, Opposition parties claimed.

However, there were also mixed views on the report among the Opposition parties and the Independents, with Fianna Fáil claiming it should not be “taken as a criticism” of the force, but Sinn Féin said it showed the Garda Síochána was “not fit for purpose”.

Independent TD Mick Wallace said it was “another report to add to the many we’ve seen already”.

Fianna Fáil justice spokesman Niall Collins said it provided “a significant opportunity for some meaningful reforms in the Garda Síochána, particularly with the proposed new independent Garda authority on the horizon.

“The report shouldn’t be taken as a criticism entirely of An Garda Síochána – that they have been battling crime and serious law and order issues with dwindling resources,” Mr Collins said, adding that the head of the inspectorate group, Chief Insp Bob Olson, acknowledged the input of rank-and-file members of the force.

“Many of the recommendations in the report will require significant financial resources and I’m glad that Bob Olson acknowledges the valuable input of rank and file members and also that he acknowledged that some of the criticisms are not unique to An Garda Síochána, they are present in many other police forces around the world,” he said.

Sinn Féin spokesman Pádraig Mac Lochlainn described it as a “comprehensive and devastating critique of the systems within An Garda Síochána”.

“It is a major milestone in Irish policing and reveals that our police service is simply not fit for purpose based on international best practice.”

“The criticism in the report of the new Garda rosters, lack of Garda vehicles and the loss of trained Garda to admin duties are a particular embarrassment to this Government,” he said. “As the report points out, not only have the Irish people been failed but also the majority of the decent men and women of An Garda Síochána. We all deserve a modern, fit-for-purpose policing service.”

Mr Wallace said: “There is no sign of real reform . . . For almost two years now, we’ve been calling for a root-and-branch review of the force, along the lines of the Patten commission, but all that seems to be coming down the tracks is a sticking-plaster job.

“Many now agree that our police force is in need of a complete overhaul, but we’re not going to get that while the Minister for Justice still insists on selecting the new Garda Commissioner and refuses to allow an independent appointment of the proposed head of the new police authority.”