Miriam Lord: review of the year 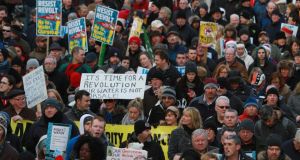 Part of the water charges protest in Dublin earlier this month. ‘The Government seemed somewhat taken aback by the size of the marches and the depth of anger and disillusionment.’ Photograph: Nick Bradshaw

It was the first Dáil sitting of the New Year and an optimistic Enda Kenny couldn’t speak highly enough of the wonder that was soon to be Irish Water.

“It will be a national flagship of high quality and integrity,” the Taoiseach gurgled, with no small amount of pride.

“As leader of the Government, I say that Uisce Éireann will be wide open in terms of transparency, accountability and justification of expenditure.

“Every Deputy on all sides and none and Oireachtas committees will have the opportunity to see that this happens.

“It is in all our interests that this be so.”

A lovely dollop of post-Christmas codswallop there from the Taoiseach at the start of 2014. And there was more, much more to come.

Twelve months on, and the coalition is on its knees thanks in the main part to the shambles of Enda’s much vaunted Uisce Éireann – the gift that kept on giving or the curse that continued to confound, depending on your political outlook.

Oh, but the country still got its national flagship. Not one to admire but one to stand back and look at in a bemused, slightly horrified kind of way.

After a truly terrible year, the Government has managed to bungle its way into becoming a national flagship for tired and inept politics.

And, unlike the Taoiseach’s dream for Irish Water, the only thing wide open was the open goal his administration presented to the Opposition at almost every turn.

After years of austerity budgets and job losses the Fine Gael/Labour administration was finally able to say this year that that the country has turned the economic corner – and actually mean it. And yet their popularity has taken a sharp nosedive.

Thanks to brilliant opposition? Not really. They hardly sparkled, although there were some stand out performers, particularly among the Independents. The Government parties drew most of their troubles upon themselves.

Water meandered along all year, sometimes bubbling under for a while only to resurface again before bursting the banks of public protest in the final quarter of the year. The curious thing is that the Government seemed somewhat taken aback by the size of the marches and the depth of anger and disillusionment among the demonstrators, many on whom had never been on a protest before.

Merrion Street didn’t seem to see it coming, although had they ditched some of the expensive consultants involved in smarmily selling Irish Water to a wary public and paid an intern to listen to Liveline or read a few newspapers, they might have twigged there was a problem.

But while there was deep annoyance with Phil Hogan’s cavalier attitude, when he was minister for the environment, to genuine questions about the utility and the costs involved in setting it up, it was a different resource which had TDs and Senators in a tizzy at the start of the year.

Plans to build an overland network of electricity pylons caused uproar in many rural communities and sent scared politicians running for cover.

As the May deadline for the local elections approached, the entire project was shunted into the sidings of an expert review. And there’s hardly been a squeak about the pylons since then.

The Oireachtas committees continued to do good work for little attention in 2014, their members finding it difficult at times to hide their jealousy at the antics of the headline hogging Public Accounts Committee. Sinn Féin’s Mary Lou McDonald and Independent TD Shane Ross were particularly effective in this regard.

Members emerged the conquering heroes after eviscerating witnesses from the Central Remedial Clinic following revelations about the charity’s questionable accounting practices and executive level pay. And their no-holds barred interrogation of former Rehab chief Angela Kerins was riveting. This episode also led to the departure from Fine Gael of veteran handler, Frank Flannery, the former Rehab chief turned lobbyist who refused to appear before the committee.

In January, when PAC hauled in the then Garda commissioner over allegations by Garda whistleblowers about some officers wiping penalty points for motorists, they got in on the biggest political story of the year.

Sinn Féin caused consternation, putting in a great showing at local level and cleaning up in Europe. But Fianna Fáil did very well too, a fact lost in the rise of the Shinners. Fine Gael fared badly but the Labour party was destroyed.

Eamon Gilmore left before he was pushed and Joan Burton was installed as Tánaiste and Labour’s first female leader in July.

“This to me is like a funurd-el without a corpse. Dere’s a sadness throughout the nation,” wailed Lord Mayor of Dublin, Christy Burke.

Labour’s Sunset Boys got the heave ho in the big reshuffle - Rúairí Quinn bowed out graciously, Pat Rabbitte went down with all guns blazing.

As soon as the political season resumed, the new Minister for the Arts, Heather Humphreys, became embroiled in a brazen example of stroke politics when an unnamed senor individual in Fine Gael attempted to stick a political unknown on to the board of the Irish Museum of Modern Art. This was an attempt to burnish his credentials before the party fixed him up with a seat in the Seanad.

Patrick McNulty, a Donegal businessman not noted for his commitment to modern art, was the chosen one and poor Humphreys stoically insisted she had appointed him on merit, though she clearly hadn’t a clue who he was.

Enda issued a fabulous apology at one stage: “Well Mr McNulty is an innocent person in this. I wouldn’t say it was my finest hour. I take responsibility for this having evolved to what people might imagine it is.” Whatever that was.

Then he decided to make his apology “to the entire process.” Whatever that meant.

In the end, Independent Gerard Craughwell snaffled the Seanad seat.

The Taoiseach rebuked Leo Varadkar in September for shooting his mouth off before the budget.

“ I don’t mind being slapped down and scolded. I’m a big boy and I’m willing to take a degree of criticism from time to time.” shrugged the leadership contender.

Micheál Martin said on radio he was preparing to become Taoiseach. Sinn Féin, meanwhile, worked steadily on getting Gerry Adams on to that GPO platform in 2016.

It looked like the party was going to get another TD into Leinster House with Cathal King red-hot favourite to win the Dublin South West byelection in October.

But Socialist Paul Murphy swiped the seat from under them with his campaign urging the non-payment of water charges and their abolition.

Senior Sinn Féin TDs had said they would pay their charges. Murphy’s success, allied to the growing public discontent over the charges, prompted a nifty U-turn from the party. They decided they would not now be paying their charges, in solidarity with the people who can’t afford to pay. There was no such solidarity until Murphy and his megaphone elbowed them out.

Meanwhile, Fianna Fáil got a wallop in the Roscommon/South Leitrim byelection when Michael Fitzmaurice (from the Ming stable) beat Ivan Connaughton to the seat.

The PR budget came and went – prudent and responsible, according to Noonan and Howlin, hoping for a bounce.

But it sank amid the rising clamour over Irish Water.

The Opposition made capital out of the Coalition’s inept attempts to deal with the issue. But Sinn Féin’s gallop was halted by the Máiria Cahill revelations – the Belfast woman claimed she had been raped by a leading IRA man then subjected to an IRA “kangaroo court” and forced to confront her attacker. Then stories came out of republican sex abusers being “resettled” across the Border in the Republic.

The party was rattled by the reaction to the story and the subsequent robust and raw nature of debates on the issue. Both Adams and McDonald seemed to lose their composure for a time and the party’s response was to sulk noisily in the Dáil.

This culminated in a four hour sit-in when business for the day had to be abandoned. Mary Lou followed up by using Dáil privilege to name a number of retired politicians against whom allegations of financial impropriety had been levelled but investigated on numerous occasions. The people concerned absolutely rejected the allegations.

But if the Dáil year began with talk of water, it ended with water too. Huge numbers of people around the country turned out to march against the charges.

This culminated in the Tánaiste being trapped in her car for hours as she tried to leave an event in Tallaght in an incident which must have been very frightening for her and her young female staffer.

Paul Murphy was to the forefront of the protest. He thinks what happened to Burton was no big deal, telling the Dáil “the Tánaiste should apologise.”

A year after the Taoiseach waxed lyrical about Irish Water, his Government totally dismantled its operating plan and slashed the charges.

But the water issue has led on to wider discontent – too many cuts, too much austerity and a feeling among many middle-of-the-road voters that their compliance in hard times was taken for granted and exploited.

Enda, and his Government, are listing badly and have a hard job to win back the trust of the people who put them in power.

They have time, but they’ll need less codswallop and a lot more cop-on in 2015.