Miriam Lord: Kelly on Code Red in the search for a Covid-19 villain 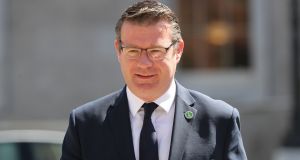 Everybody stand back – Kelly’s gonna blow!

The Labour leader had been rumbling on the floor of the Dáil for nearly a month. Every week, getting more annoyed and frustrated about the lack of transparency on the Government’s handling of the Covid-19 crisis and demanding to know if it is the Minister or the mandarins who are in charge.

Outrageous, as he likes to bellow.

Do we have a villain yet? This crisis won’t feel properly real until we have one. Viruses don’t count because they can’t be doorstepped by outraged journalists.

Which is also outrageous.

We need a villain at this stage. Is it the Taoiseach, or his Minister for Health? Is it the Canonised Medical Officer (CMO) Tony Holohan or is it the shadowy organisation known as Nphet?

Alan has been busy giving the impression of a man closing in on a target. He has contacts. He knows things. And clearly, he has his eye on the CMO.

There was “a pretty embarrassing situation” for the Government on Wednesday, he noted during Covid questions to the Taoiseach. Leo Varadkar made “some pretty honest comments” about the possibility of an early reopening of schools, only for those comments to be publicly “shut down” a few hours later by the rampaging CMO.

Something must be done about this. Our political leaders have to take back control of the message. “There must be one voice: that of the Government.”

He all but accused the Canonised Medical Officer of losing the run of himself and dictating to the Government and the HSE from his position as chair of Nphet (the National Public Health Emergency Team).

With each Dáil sitting and more unanswered questions, the colour-coded Kelly alert level has been climbing. Stage blue (general explosive risk) is his default setting. Stage yellow (significant risk) is the preferred one, with stage orange or even stage red (boom!) always around the corner.

And with the newly installed Labour leader at the helm and anxious to stage an early spectacular, the army bomb disposal unit has been put on standby in Leinster House for the duration of these tense pandemic sittings. Unfortunately, on Thursday, officers were resting following their heroic dismantling of a grenade from the War of Independence found in the Grand Canal at Harold’s Cross.

At lunchtime, Kelly reminded the Taoiseach that he knows all about letters sent by the HSE to the Minister for Health and his department complaining about the nefarious carry-on of the mysterious Nphet with its impenetrable web of subgroups and proliferating membership. He had been badgering the Taoiseach about this for the last three weeks and demanding their publication.

All the while hinting that the content of these communications will blow the lid off the whole Covid caper in this country.

Leader on a roll

Leo Varadkar didn’t seemed particularly concerned, even when Kelly said that the letters, as a direct result of him pressurising the Government to stop sitting on them, would finally be released later in the day.

The Labour Deputy for Tipperary is on a roll, according to himself. There was the release of the letters to chalk down as a win, and he also claimed credit for finding a chairman for the new Covid-19 Oireachtas committee, “delighted that my good friend and colleague Deputy Michael McNamara took up our suggestion to put his name forward and has been supported as chairperson of that committee”.

Not only that, but there wouldn’t even be a bells and whistles Covid-19 committee without Alan’s Labour Party.

He hoped that a lot of the questions he had been raising about “governance issues will be dealt with by the Covid committee, which we asked to be set up at the first outing of this Dáil, something that everybody shot down at the time but have now come around to”.

On a very dull day in the socially distancing Dáil, confirmation that the letters were due for imminent publication was welcome news.

Waves of excitement and giddy anticipation washed over the Dáil chamber and scoured out the cockles of scalp-hunting scoop merchants in assorted newsrooms. Would they rock the foundations of the State, as a former Labour leader once promised but didn’t deliver?

There wasn’t long to wait.

AK47 returned to the chamber when it was the Minister for Health’s turn to take questions. He rose to his feet, holding sheets of paper.

Behind the scene, Leinster House officials were making frantic but fruitless attempts to contact the bomb squad.

“You won’t be surprised that my first set of questions are in relation to his famous set of letters that I’ve been requesting for 3½ weeks,” he said to Simon Harris, who was bravely feigning nonchalance.

Kelly held up his bundle of paper for all to see.

That’s when the call went out: “Stand back everyone, Kelly’s about to blow!”

He just stood there. And said nothing.

It was one helluva of a dramatic pause, enough time for AK47 to imagine himself pulling the pin from a live grenade with his teeth.

Advisers started running from Government Buildings like Dominic Cummings did on the day he discovered Downing Street was riddled with the virus.

Kelly looked up and into the fearful face of the young Minister for Health.

Time stood still. We waited for the bang.

He went through a couple of the letters, including “the most EXPLOSIVE letter of April 19th . . .”

Some tensions between the senior medics, right enough. Agreed processes not properly followed. And so on.

“I don’t think the letters are ‘explosive’,” said Harris, making little quotation marks in the air with his fingers. He explained why.

And that was that, really.

He thinks Covid-19 could be a conspiracy, “a great con” job on the people.

He went off like a rocket, lashing out at the Government for making such a mess of handling the crisis, particularly in relation to nursing homes, healthcare workers and personal protective equipment (PPE).

“These people don’t matter,” he roared at the Taoiseach, “but we see what your value of life was when you introduced abortion here on a desperate liberal regime.”

“There are a lot of questions here. I am beginning to question – is it a great con? We have many, many people that are dying every year with influenza. And is there something else more subtle and more serious underneath this whole crisis and this whole pandemic?”

Covid-19 – a great con? Perpetrated by the liberals?

Seriously Mattie. Where is this bilge coming from?

No agreement reached to reopen special needs schools – Fórsa 08:54
Mary’s story: Roscommon woman believed a lifetime of exile was as it should be 06:00
Covid-19: Nursing homes to be prioritised for vaccination for 10 days amid supply shortage 01:00
Plan for second set of Leaving Cert exams for Covid-affected students under consideration 01:00
President leads tributes to HIV/Aids campaigner Fr Michael Kelly 22:52