Miriam Lord: Enda Kenny is on hand for a robotic display 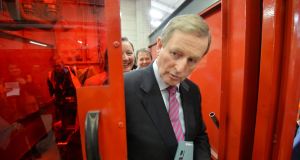 There is no plan B.

Is it too late to find one?

This election was always going to be “a dogfight” he told RTÉ’s Seán O’Rourke. “Every constituency is a battlefield.”

His party has been preparing for it since they entered Government five years ago. Engagement by instalment.

They were ready to launch their full offensive last November but didn’t. When Enda Kenny fired the opening shot earlier this month, the plan of campaign was well in place.

And they’ve hardly moved since then.

The last full week of campaigning is under way. It began with yet more bad news in the opinion polls for the party and their Coalition partner, Labour.

Their battle bus is now a crisis coach, or the meltdown mobile, as some are calling it.

Surely time to up the ante. Time to mobilise the big guns.

Leo Varadkar was rolled out on Wednesday morning. His main weapon a kind of dangerous diffidence, which doesn’t really fit into the All Guns Blazing category.

Fine Gael might not return to Dáil Éireann as the biggest party, he mused.

Depending on your point of view, that could be either a threat or an inducement.

Shipping such unexpected heavy resistance, a robust counter-attack was on the cards from the main Government force.

Perhaps now we were going to see Enda take it to the streets.

He visited a big factory in Birr which makes central heating boilers.

Very galvanising. (If you happened to be a politically active storage tank or an excitable flue.)

“We’re concentrating on workplace events,” explained one of his entourage.

It’s all Irish Water’s fault and the ever-present threat of flying columns of protesters in the middle of walkabouts.

Grant Engineering is an international success story in the world of boilers.

The Taoiseach and his Minister for Jobs, Richard Bruton, were delighted to visit the factory and hold it up as a shining example of how “export-orientated companies” can provide secure jobs.

It also gave Enda a chance to deliver his single transferable speech about growth forecasts, capital funding, job percentages, his Long-Term Economic Plan and the need to keep the recovery going.

A captive audience of boiler-suited factory workers listened politely to his uninspiring spiel, more designed to thrill an IMI or Ibec love-in than send a sceptical hall full of PAYE workers home sweatin’.

At least the much wished for “spark” made its maiden appearance. That’s what all the politicians and commentator are talking about – the need for some spark to happen along and set this listless campaign alight.

They were flying in Grant Engineering. The photographers nearly fainted with joy at the prospect of visiting a welding booth with the Taoiseach. But when he met the welders, the flame was out.

“We were told to quieten it down a bit,” said one of them. So it looked like Enda was having a conversation with someone over a barbecue grate.

“Coherence.” That was the new word for this week. There are alternatives (actually, there aren’t, because you can only have one alternative) available to voters next week, said the Taoiseach, but they are “without coherence.”

Earlier, he conceded on the radio that Fine Gael’s campaign is not firing on all cylinders.

When he was in Birr, he could have asked Grants to knock up a new one for him.

Like Micheál Martin, the Taoiseach is now also dismissing the polls, but the string of disappointing figures for his party can’t be ignored either.

He admitted “the weakness I’ve had in this regard” was not ‘to translate’ the importance of the recovery and what it means for the people, to the people.

A communications failure, in other words.

And yet, in Birr, the storyline and its delivery didn’t change.

“We have a story to tell” stresses Enda, ad nauseam. It’s one that his strategist prepared earlier, much earlier.

It isn’t improving in the telling, even if the facts within should be enough to fashion a winning narrative.

When he toured the “Robotic Welding Area” it must have felt like familiar surroundings.

Because since the campaign began, Enda has been talking like someone who has undergone a severe course of robotic welding at the hands of his handlers.

He has to cut loose, we thought, as he made small talk with the factory boss in front of a “robot bender” – an automated metal pressing machine.

“Today is its first day of actual use,” said Stephen Grant, as the giant arm took sheets of metal and turned them into boxes.

The Taoiseach seemed tired. Maybe he is bored with delivering the same speech.

Richard Bruton, on the other hand, was much more passionate.

You could sense he knows that there’s danger afoot for Fine Gael.

“This, in my view, is the most important election I have ever stood in,” he declared.

“Because there is a real danger that Irish voters will sleepwalk into making a decision that they will regret for a great number of years to come.”

“I understand the hurt that people have felt, I can understand the anger, but this is an election where people need to use their brains and not their emotions.”

He said he had twice seen recoveries achieved and then thrown away by incoming administrations.

“Don’t gamble on parties that have no track record and no plan,” he appealed.

He seemed almost tearful as he finished his address.

The company is located on the outskirts of Birr in a place called Crinkle. Given that Enda had earlier talked about “bottom-up leadership” maybe he could end his phoney war here, at the Battle of Crinkly Bottom.

After all, he was on Barrack Street, which is off Military Road, near Cribben Terrace, which is beside Cemetery Road. And right beside them, Swag Street.

But he’ll have to fight to claim that prize, and time is running out.