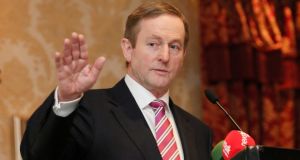 The Taoiseach had a few figures of his own and he gave them straight to the Sinn Féin leader in the sort of form he likes best – an All-Ireland context. Photograph: Laura Hutton/Photocall Ireland

The 40a used to be a bus route to Finglas.

But it was done away with.

So Fine Gael and Labour took over the number after the 2011 election and parked it in their programme for government.

They made a fuss about it at the time and then they went very quiet. But it’s still there, engine idling, in the interests of political reform.

Not many people know this.

The Government is, quite deliberately, ignoring it now.

But its existence has been niggling away at Gerry Adams for some time. The Sinn Féin leader knows it’s out there. He knows what it’s for. But he just isn’t sure where to find it.

Adams, constantly frustrated during Leaders’ Questions by what he feels is the Taoiseach’s inability to answer a straight question, knows there is something hiding in the rulebook which can help him.

Time and again, as Enda blathers on, he looks towards the Ceann Comhairle and asks him for his help. Is it not the case, he implores, that all Ministers – including the Taoiseach – are obliged to properly address the questions they are asked?

While this is going on, Enda looks around with innocent eyes and says nothing.

Of course, he always speaks to part of a question, most of the time.

But he’s as good as Bertie now at saying damn all at considerable length.

(It was the single mothers of Ireland yesterday.)

Apropos of the lone parents “many of them” it seems, have been telling Enda how much they want to return to the workplace. Apparently none of the ones he meets are shouting blue murder over a proposed cut to their allowance – a situation which had the Fianna Fáil leader very exercised yesterday morning.

Then Gerry Adams raised the issue of salary increases for ministerial advisers which were sanctioned in breach of Cabinet guidelines.

He named a number of Ministers who looked for pay levels above the cap for their advisers, including the Minister for Finance, Michael Noonan, “who wants to impose austerity on the people of Greece”.

He wanted the Taoiseach to tell him why this is so.

Unfortunately, he also decided to compare the consideration given to the Coalition’s officer corps with the treatment of lone parents on social welfare.

This gave Enda the opportunity to talk a lot about the Government’s policy on getting people back to work and far less about salaries and expenses.

Adams had a lot of figures at his fingertips. No austerity in Merrion Street, he reckoned, talking of a culture of privilege in Government and a golden circle to rival the last government.

But the Taoiseach had a few figures of his own and he gave them straight to the Sinn Féin leader in the sort of form he likes best – an All-Ireland context. “Special advisers in Northern Ireland have gone from 90k to 110k stg. I didn’t hear you comment on that.”

He didn’t. Instead, he told Enda: “You’re living in a bubble!”

Fine Gael’s Patrick O’Donovan shouted back “what about your trampoline?” (referring to his recent comments about recreational activity.)

“Every so often when you come in here, we try to prick your little bubble” added Gerry. “ It’s not surprising that you’re insulated from many of these little difficulties because you, Taoiseach, are paid more than the President of France, which has a population of 64 million.”

And O’Donovan chortled: “There’s not much insulation in a trampoline!”

The Sinn Féin leader went on to list some of the salaries enjoyed by Government members and their staff.

“What about Sinn Féin’s MPs on the Queen’s shilling?” whooped O’Donovan, having exhausted the possibilities of the trampoline.

One way or the other, Adams wasn’t getting much change from Enda on the salary hikes. According to the Taoiseach, the advisers concerned were remunerated in accordance with their experience and expertise.

Then he threw in another reference to the BBC Spotlight programmes last year –which reported in eye-watering detail that Sinn Féin had allegedly creamed enormous amounts of money in payments and subsidies from the British Exchequer using fictitious business fronts.

“It’s interesting that Sinn Féin is by now far and away the best-resourced party in the country” mused Enda.

“Ours is a 32-county party in two states” explained Sinn Féin’s Brian Stanley.

“The allegations are untrue” said Gerry.

Naturally, he was irritated with Enda muddying the waters with his replies. So too was Micheál Martin. Willie O’Dea was also annoyed.

A section in the programme for government promised: ‘We will introduce a role for the Ceann Comhairle in deciding whether a Minister – which I presume includes the Taoiseach – has failed to provide reasonable information in response to a question.’ Has the rule been introduced yet? When will it be introduced?” he inquired during the Order of Business.

Oh yes, said Enda. “The Ceann Comhairle has already made rulings on that.”

But the Taoiseach was adamant. “The Ceann Comhairle has already ruled, on a number of occasions, that Ministers did not give adequate information.”

“I – I can’t remember it having been invoked,” he spluttered.

Enda told him to check the record. Then the Ceann Comhairle Seán Barrett, with no small amount of pride, intervened. “It is Standing Order 40a and I have dealt with a number of them.”

”Oh” gurgled the Ceann Comhairle with a smile, “any time.” All you have to do, said Barrett, is “write in the normal way and it will be considered appropriately.”

Best of luck there Willie with the number 40a.

Tell us how you get on.