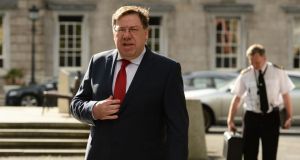 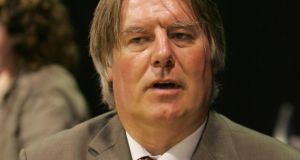 Interesting remarks by Charlie McCreevy and Brian Cowen this week at the Oireachtas banking inquiry about that infamous Fianna Fáil tent at the Galway races.

But they wouldn’t have been alone in that view. A lot of their colleagues resented having to turn up in Ballybrit for the annual Adoration of the Bertie and the blessing of the builders.

Some, like the late Brian Lenihan, never darkened the doors.

McCreevy said he was more interested in the racing and hated having to leave the track to go into “that bloody tent”. We don’t doubt him.

He was most eloquent on the matter, as the transcript of his evidence to the inquiry shows. “ I never . . . Most of the people I met in the Galway tent the few days I went into it when I wasn’t able to have a few quid and lose or win a few quid with the bookmakers, was mostly . . . were all types of people from all walks of life in Ireland and not just big builders.

“So I don’t . . . and, by the way, I don’t think ever, for the few times I was in the Galway tent, and I only spent . . . I didn’t spend a lot of time there up and down the . . . When I was inside anyway, I don’t actually remember anybody in their drunken stupor ever asking me any, kind of, a simple question at all.”

Cowen was equally unimpressed by the Galway tent. Two weeks after he took over from Bertie Ahern as taoiseach he abolished it. Mind you, it was a huge source of embarrassment to the party by then.

“I had read about this thing about the mythology that grows up about contracts being signed and big meetings being held in this tent . . . I mean, why would you be bringing the media to sit down beside you if there was all this surreptitious activity going on? Sure, it’s all nonsense.”

Speaking of the media, Charlie McCreevy has one specific memory.

He remembers his office being inundated by requests “from loads of journalists wanting a freebie into the Galway tent in order to get plenty of drink and food”.

Who were these journalists? One very noticeable feature of the event was the organisers’ willingness to let reporters come in and roam around the place. In the general scheme of things this doesn’t happen. The level of access was welcome but most unusual, as if the organisers deliberately wanted to draw attention to the openness of the exercise.

The Galway “Tint” existed for 15 years.

I was there for most of them.

It was started in 1984 by businessman and close associate of Ahern, Des Richardson, the year Bertie became leader.

In the early years, the goings on in “the tint” didn’t get that much coverage, beyond the standard mentions in social diaries and colour pieces.

Before the madness, their marquee was a place of relative calm amid the chaos of festival week. The atmosphere was relaxed, you could sit at a table, have a chat and a glass of wine and then battle back to the parade ring. It was handy for “names”. Lots of Mr Fat Cigars and their Lovely Lady Wives just back from some bash or other in Marbella. Lots of nationally known politicians.

But when Bertie assumed power in 1997 the allure of that hospitality tent grew more enticing.

People were beginning to take serious notice of this gathering in Ballybrit, where senior government politicians and some of the biggest names from the world of business were enjoying their downtime together – getting to know each other better, swapping racing tips and anecdotes and maybe a little advice and information too.

It took a little while for the media posse to catch up but eventually the spotlight swivelled on to the tent. And the more publicity it got the more certain people wanted to be seen there.

By the same token, most of those major names from the business world melted away to the privacy of the corporate boxes, leaving behind the millionaires from the development and property world.

Nobody expected to see brown envelopes on the tables or property developers spitting on their hands and sealing deals with legislators. But the preponderance of builders, developers and auctioneers hosting tables was impossible to ignore. A yearly highlight was the lavish cocktail party in the Radisson hotel hosted by developer Bernard McNamara in his glass-walled penthouse overlooking Galway Bay, when Bertie would be guest of honour.

As the tent grew in notoriety, even the developers began drifting away. By the final years, many of the tables were bought by public relations firms, showing off to their clients, who were delighted to be in the famous tent.

Cowen and McCreevy were right about the nonsense claims of shadowy business schemes taking place in the tent between legislators and parties that stood to benefit from their decisions.

But they are either innocent or deluded if they believe the event was nothing more than a chance for people to enjoy a day at the races and bring in a few bob for Fianna Fáil.

That’s how it goes.

Former Labour stalwart Tommy Broughan didn’t spare his former leader during a blistering attack in the Dáil yesterday on the party’s Government record.

“Events of this week in Dáil Éireann have marked another disgraceful milestone in the demise of the Labour Party,” he began, citing cuts to lone- parent payments and new measures brought in on the payment of water charges.

They “represent an assault on the poorest sections of Irish society and the total abandonment of the century-old egalitarian economic ideals of the founders of the Irish Labour Party”.

“I look around at some of the senior Labour Party deputies – people who, sadly, I sometimes refer to as extinct volcanoes”, thundered the veteran TD for Dublin North East.

There was a time when some of these extinct volcanoes would have savagely protested the changes. Instead, “they have gone, gently, quietly, into the good night of oblivion which will happen to them, sadly, in the coming general election”.

And there was a time they would have condemned the measures “before the Rabbitte-Gilmore leadership eviscerated and destroyed the heart and mission of the Labour Party – as those gentlemen and their colleagues tried so hard and so desperately and in a hand-to-hand way to do but signally failed to before 1999”.

“Eamon Gilmore had the effrontery to stand up in this chamber a couple of weeks ago and talk about the political cost to himself of his appalling betrayal of the independent Labour Party programme developed until 1997 by generations of the Labour Party.

“Nowhere did he recognise the intense suffering and the real economic and social cost visited on citizens by his cowardly surrender to the vicious Fianna Fáil-Fine Gael austerity project from 2009.”

Congratulations to Brendan Griffin, Fine Gael TD for Kerry South (and a novelist too) who became a dad two week ago. Breandán was born in Kerry General and he is Brendan and Róisín’s second child, they have another boy, Micheál.

“He’s soloing with the left and the right foot already,” says Griffin, who was proudly showing off the tiny Kerry jersey he bought this week for the new arrival. The backbencher went out to wet the baby’s head with some parliamentary party colleagues on Wednesday night.

They pitched up at Enda Kenny’s local in Dublin – a fine establishment called the Ginger Man – and discovered the boss under siege from AC/DC fans in for a pint after the heavy metal band’s concert in Lansdowne Road. The Taoiseach signed autographs and T-shirt and posed for selfies with fans.

Meanwhile, a Fianna Fáil interloper arrived on the scene.

Bobby Aylward’s political GPS must have been on the blink as he landed in the middle of the Fine Gael crowd. Aylward is the Dáil’s newest TD – he was returned after the recent Carlow-Kilkenny byelection. He launched into a conversation about hurling with Griffin.

There followed a discussion about the merits of about the new penalty rules which, by all accounts, became rather heated.

Bobby eventually informed the new father, in very strong terms, that he, as a mere Kerryman, had no right to lecture a Kilkenny man, and an Aylward to boot, about hurling.