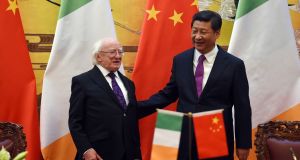 President Michael D Higgins and his Chinese counterpart, Xi Jinping, have exchanged letters about the plight of an Irish businessman who has been detained in China for almost two years.

Richard O’Halloran has been barred from leaving China since March 2019 after becoming embroiled in a dispute involving Min Jiedong, the Chinese owner of his Dublin-based employer, China International Aviation Leasing Service.

Mr Min has been jailed for defrauding Chinese investors in a funding scheme that predates Mr O’Halloran’s work for the firm. His is the first known exit ban imposed by China on an Irish citizen.

According to a spokesman for Mr Higgins, the Chinese leader replied last Friday to the President’s letter suggesting “the relevant authorities on both sides may maintain communication and co-ordination to create conditions for an early and proper solution to the case”.

The businessman’s wife, Tara O’Halloran, said last night she was constantly asking the Government and Irish authorities “to make more noise about Richard’s case” but there had been “no line of communication” from the Government to the family about his case.

Details of the exchange between the presidents over Mr O’Halloran’s continued detention come three weeks after the father of four from Foxrock was denied entry on to a flight home from Shanghai after being told his exit ban had been lifted.

Mr O’Halloran, a relative of former Fine Gael taoiseach Garret FitzGerald, was told by police during an interrogation three weeks ago that the ban had been lifted but he was escorted out of the airport by seven police officers.

He travelled to China in February 2019 to try to resolve the affairs of the leasing firm. He has never been charged with any wrongdoing and has testified as a witness several times in the prosecution of Mr Min.

Mr O’Halloran was asked during a recent interrogation by the Chinese authorities that he personally repatriate a $36 million (€30 million) payment to China.

The Chinese authorities have demanded the return of a leased aircraft owned by the company but Mr O’Halloran’s family have said he is not permitted to do this under Irish law.