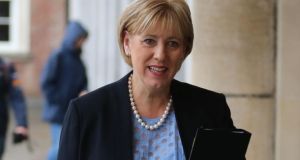 Minister for Arts Heather Humphreys did not know a second person she appointed to the board of the Irish Museum of Modern Art was a member of Fine Gael, the Minister’s spokeswoman has insisted.

Ms O’Regan was appointed to the board alongside Seanad byelection candidate John McNulty, increasing the numbers on the board from nine to 11.

However, Ms Humphreys’s spokeswoman said yesterday the Minister was not aware of Ms O’Regan’s connections when she appointed her to Imma. Mr O’Donovan and Ms Humphreys are friends.

“She didn’t know she was a Fine Gael member at all,” she said. “Not in any way.”

Speaking at a meeting of the North-South Ministerial Council in Dublin Castle yesterday, Taoiseach Enda Kenny said he has not issued a formal direction to his TDs and Senators on how to vote in the byelection.

“It’s an election, obviously, that when the process commences it can’t be stopped – it goes through to the end. So that’s the position.”

Senior Fine Gael sources claimed the Taoiseach’s position had not changed since he told his parliamentary party earlier this week to adhere to Mr McNulty’s request that Government TDs and Senators do not vote for him. The electorate for the byelection comprises TDs and Senators only.

“You can’t tell politicians not to vote,” the source said.

A considerable number of Fine Gael and Labour members of the Oireachtas, including Labour deputy leader Alan Kelly, have said they will support Mr McNulty because they do not want to support the Sinn Féin candidate or Independent Gerard Craughwell, who also has the backing of Fianna Fáil, increasing speculation Mr McNulty will actually win the byelection.

Mr Kenny yesterday declined to say if Mr McNulty would keep his Seanad seat if elected. The result of the election will be known next week.

Minister for Foreign Affairs Charlie Flanagan has said he will vote in the byelection, but has declined to say who he will be supporting.

Tánaiste Joan Burton said Labour TDs and Senators “will exercise their secret ballot and a lot of them already had by the time the discussion started”.

However, another Minister privately said he was giving consideration to either spoiling his vote or supporting Mr Craughwell.

Mr McNulty was appointed to Imma just days before his nomination as Fine Gael’s candidate in the Seanad byelection to replace Deirdre Clune, who has been elected to the European Parliament.

He has since stepped down from Imma and has attempted to pull out of the Seanad race but the incident has been a major political embarrassment for Fine Gael, drawing accusations of cronyism and stroke-pulling.