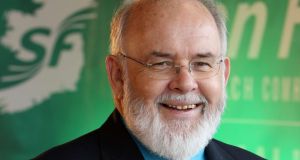 Sinn Fein’s Francie Molloy said this election campaign was “very much about equality but some parties find it very hard to understand that and some parties don’t accept equality.” Photograph: AFP/Getty Images

Sinn Féin’s Francie Molloy breezed home in Mid Ulster with a substantial majority, but there was controversy at the count centre in Ballymena in the early hours of Friday when he appeared to be triumphant at the defeat of the DUP’s Rev Willie McCrea in nearby South Antrim.

Mr Molloy said he would be writing to Rev McCrea to let him know his feelings, but the DUP man’s son Ian McCrea, who was standing for the party in Mid Ulster, hit back saying instead of putting pen to paper Sinn Féin would be better spending their time attending Westminster.

Mr Molloy retained his seat with a whopping vote of 19,935, with the Ulster Unionist’s Sandra Overend being runner-up with 6,318. Mr Molloy said he started out in politics over 50 years ago and was involved in the Civil Rights movement.

He said this election campaign was “very much about equality but some parties find it very hard to understand that and some parties don’t accept equality. But equality endangers no one and is good for everyone.”

From the platform Mr Molloy spiced up proceedings when he said: “This constituency has changed dramatically from when (Sinn Féin’s) Martin McGuinness first defeated Willie McCrea and I understand that Willie is on the run again so I will send him a letter to explain what it is all about.”

That drew some cheers from the Sinn Féin man’s supporters.

Away from the victory podium, Mr Molloy explained why he had brought up Rev McCrea’s name. Mr Molloy said: “Willie was the incumbent of the seat originally whenever Martin McGuinness won the seat and from when Martin won it, it changed the whole atmosphere across Mid Ulster and now that Willie McCrea has lost his seat again I thought it was an example of how he has now been rejected from another constituency.”

Rev McCrea’s son, Mid Ulster DUP candidate Ian McCrea, said the party would look to see what had gone wrong in South Antrim, but in a dig back a Sinn Féin’s Westminster abstenionist policy he said: “While my dad may have lost his seat at least he had the decency to take his seat.”

And referring to Francie Molloy’s letter writing skills he said: “Go and spend your time and take your seat at Westminster and represent the people that you are elected to represent.”

Meanwhile, Ms Overend said the Ulster Unionist Party had increased their vote in Mid Ulster and she said that was an endorsement of the work she has done as an MLA for the area.

She wished to congratulate Danny Kinahan, the party’s new MP for South Antrim, which brought cheers from the party faithful and she claimed: “The Ulster Unionist Party is back.”