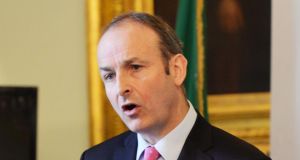 Micheál Martin, leader of Fianna Fáil: “I have never agreed with washing the party’s dirty linen in public and I want it to stop now.” Photograph: Alan Betson / The Irish Times

Fianna Fáil leader Martin has accused some of his TDs of having a pathetic and juvenile lack of discipline and said they owed it to the founders and members of the party to work harder.

Mr Martin also told a meeting of his front bench many deputies were doing a better job of undermining Fianna Fáil than Fine Gael, Labour or Sinn Féin.

Those present interpreted the comments as criticisms of Galway West’s Éamon Ó Cuív and Carlow-Kilkenny’s John McGuinness, who have both been critical of the party’s direction in recent weeks.

Mr McGuinness, who repeated his criticisms of the party and its management, insisted that he be allowed respond to what Mr Martin had said, leading Mr Kelleher to say: “There is no responding in this, you accept it or you don’t.”

Mr Ó Cuív had left the meeting by this stage.

Mr Martin is under pressure after a string of poor opinion polls, with last week’s Irish Times/Ipsos MRBI poll putting Fianna Fáil on 17 per cent, a drop of four points.

The byelection in Carlow-Kilkenny on May 22nd has taken on an added importance for Mr Martin, with some TDs saying his leadership may be called into question if there is a bad result. However, this was denied by finance spokesman Michael McGrath yesterday.

The defection of Cllr Patrick McKee from Fianna Fáil to stand for Renua Ireland at the byelection was also raised.

After his speech at the end of the meeting, sources said Mr Martin attempted to shut the debate down and told his deputies to go off and reflect on what he had said.

“He sat down and stood up a few times before he could shut it down,” said one TD, adding that Mr Martin used a prepared speech once a discussion on policy had concluded.

“I have never agreed with washing the party’s dirty linen in public and I want it to stop now,” he said, adding that rank-and-file members looked to the parliamentary party for leadership.

“The carry-on for the last few weeks is totally unacceptable, juvenile and futile. We have a collective responsibility to rebuild our party; we owe it to the party founders.”