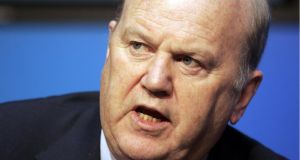 Minister for Finance Michael Noonan: “What we need to do between now and Christmas is exit the bailout.” Photograph: Dara Mac Dónaill

Minister for Finance Michael Noonan has made the case for a tougher budget next month than the target Labour is pursuing.

Amid tension within the Coalition over the new fiscal plan, Mr Noonan said yesterday that the Government should return a primary budget surplus in 2014 to secure the confidence of the market in the wake of the bailout.

Such a surplus would be achieved if the tax income was greater than the day-to-day cost of running the State when excluding interest payments on the national debt.

To do that, however, the Government would have to undertake more cutbacks and tax measures than the €2.5 billion targeted by Labour.

Although Minister for the Environment Phil Hogan signalled that there may be scope to marginally reduce the €3.1 billion set down in the troika deal, the Government would have to come close to that sum to deliver a primary surplus.

Mr Noonan’s intervention met with an ambiguous response from Minister for Public Expenditure Brendan Howlin, who said a primary surplus was an objective but “not a big factor” in his planning.

“Having a primary surplus is obviously part of the considerations but only one of the many considerations,” he said at a Labour Party meeting.

The Minister for Finance was speaking as he arrived at Fine Gael’s strategy meeting.

“What we need to do between now and Christmas is exit the bailout and to do that in a convincing way and stay out and get money at reasonable interest rates we need to run a primary balance or a primary surplus,” he told reporters.

Mr Noonan later told the private gathering of Fine Gael TDs and Senators that the achievement of a primary surplus could see the national debt peak next year and send a strong signal to private debt investors. Based on current figures, however, he would have to cut the budget deficit to 4.8 per cent to deliver a primary surplus.

Such a target for the budget deficit, which takes account of interest payments, would be more demanding than the 5.1 per cent set out in Ireland’s agreements with the troika.