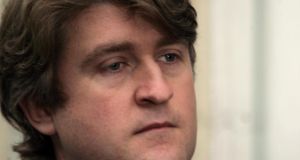 Clare TD Michael McNamara is set to return to the Labour fold after losing the party whip in May.

Mr McNamara was the only Coalition deputy to vote against the sale of the State’s 25 per cent stake in Aer Lingus to International Airlines Group (IAG) when it was put to a Dáil vote.

“It’s expected that he’ll be rejoining the parliamentary party shortly,” a Labour spokesman confirmed on Wednesday.

Mr McNamara did not attend the Labour think-in in Wicklow at the weekend; the TD is on honeymoon.

Speaking after he lost the Labour whip in May, Mr McNamara said he still wanted to run for the Labour Party.

Their engagement was announced in The Irish Times on St Valentine’s Day.

Mr McNamara contested the 2011 Dáil election against his future father-in-law, Dr John Hillery of Fianna Fáil. The Labour deputy was elected at his first attempt to win a seat, securing 8,572 first preference votes, while Dr Hillery got 6,015 and was eliminated on the ninth count.

There was speculation that the pair would do battle again in the upcoming general election, but Dr Hillery did not contest the Fianna Fáil selection convention at the end of July.

Mr McNamara was the sixth Labour TD to lose the whip after voting against the Government since the Coalition took office.

Two of them, Tommy Broughan and Róisín Shortall, remain Independent TDs and are strongly critical of the Government.

Colm Keaveney, who voted against the Social Welfare Bill in 2012, later joined Fianna Fáil while Patrick Nulty resigned his seat in Dublin West.

However, Westmeath TD Willie Penrose, who resigned as minister of state in protest at the closure of Mullingar Army barracks, rejoined the parliamentary party after losing the whip for a period.