McHugh heads off to the Donegal Gaeltacht for the summer

Junior minister a bright and eager student, his teacher says 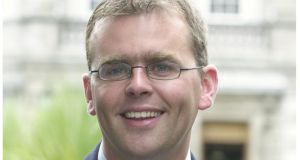 Joe McHugh: “I hope that my efforts will act as a catalyst to encourage people to use the language. I am determined to improve my own Irish language skills.” Photograph: Alan Betson/The Irish Times

Reading some of the stories about Joe McHugh and his elevation to the ministerial ranks this week, you would be forgiven for thinking he had come directly from Dagenham to Dáil Éireann and wouldn’t recognise the ghost of Peig Sayers if she slapped him in the face with a cold, rain-drenched shawl.

Within minutes of his appointment as junior minister in the Department of Arts, Culture and the Gaeltacht, a narrative was emerging which suggested that Donegal native McHugh would be all at sea when discussing fisheries with the men of Aran and would flounder if asked to distinguish the modh coinníollach from the tuiseal ginideach when doing deals in Dingle. Or An Daingean.

Conradh na Gaeilge staged a protest to highlight its concerns over the new junior minister’s ability to speak Irish and claimed his promotion was a “demotion” for the language. Sinn Féin’s Peadar Tóibín agreed and couldn’t bring himself to congratulate McHugh on his appointment, such was his disbelief that he – and his senior Minister Heather Humphreys – didn’t have more than a cúpla focal.

Next up was Fianna Fáil’s Éamon Ó Cuív, who called his appointment a “slap in the face” for Gaeltacht communities and demanded Taoiseach Enda Kenny rectify what he termed a “significant error”.

In response, Kenny announced his new Minister was being shipped off to the Gaeltacht for the summer like a lazy child being sent west for a few weeks ahead of their Junior Cert year. He assured the Dáil that when McHugh came back in September, he would be fluent.

The story so far has left Liam Ó Cuinneagáin utterly perplexed. He is the latter-day Prof Henry Higgins with responsibility for bringing McHugh’s Irish up to scratch, starting tomorrow at Oideas in Gleann Cholm Cille in southwest Donegal. He has been teaching adults Irish for nearly 40 years and doesn’t believe he is facing much of a challenge this time.

“Joe’s been here twice already and came off his own bat so I have to say I’m slightly puzzled by all the attention the story is getting,” he told The Irish Times. “When Joe was growing up he would have been surrounded by Irish and would have been pretty fluent, so what we intend to do next week is make what he has comes alive again.”

McHugh said as much when addressing the controversy – in both Irish and English – yesterday. “I hope that my efforts will act as a catalyst to encourage people to use the language. I am determined to improve my own Irish language skills. I intend to keep people informed about my progress via social media and I will be posting useful phrases which people can use in their everyday lives,” he said.

He will be following in the footsteps of Mary McAleese, Leo Varadkar, Eamonn Andrews and Daniel O’Donnell who have all studied in the college and “will certainly go into an advanced class as I know that his comprehension is already very good”, Cuinneagáin said. “He will also have a specialist class because there will be certain things, phrases and concepts that he will need to know about doing business in Irish. This is really about sharpening the tools he will need to do his job as well as he can, but he is a very smart man and there will be no difficulties.”

Of course we’ve been here before, albeit without the brouhaha. In the 1970s, Fine Gael’s Tom O’Donnell was made minister for the Gaeltacht by then taoiseach Liam Cosgrave and had a considerably worse command of the language than McHugh. Back then though there was no Twitter, so the scope for smart aleckery was greatly diminished and O’Donnell managed his portfolio without much ado despite his linguistic shortcomings.

What can McHugh expect over the coming days? Ó Cuinneagáin says Oideas is not a typical Irish college and the junior minister won’t be expected to board with a terrifying bean an tí and won’t be rapped on the knuckles or sent home from the ceilidhí mór if he is caught speaking English during slow sets.

“That strategy is used to keep children focused and it works well enough but it is not needed here,” Cuinneagáin said. “In any event, Joe is very bright and will do very well. I don’t want any Gaeilgeoir listening to see what kinds of mistakes he is making next September. That would be very mean spirited.”