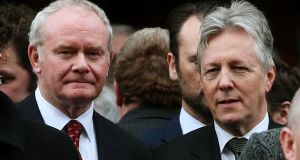 Deputy First Minister Martin McGuinness has accepted an invitation to attend a state banquet in honour of President Michael D Higgins visit to Britain next week.

Hosted by Queen Elizabeth II, the dinner will be held at Windsor Castle and is due to be attended by Taoiseach Enda Kenny, First Minister Peter Robinson and Tánaiste Eamon Gilmore.

In a statement issued this evening Sinn Féin leader Gerry Adams he had previously welcomed the state visit “in the context of building new relationships within Ireland and between these islands” but added the decision confirming Mr McGuinness’s attendance may cause difficulties for some republicans.

The visit, he said, must be viewed against the backdrop of “huge political changes that have taken place in recent years - changes in which Irish republicans have played a leadership role.”

Reaffirming Sinn Féin’s goal of achieving an united Ireland “which accommodates those who define themselves as British”, Mr Adams said it was “within this context” that he could confirm that Mr McGuinness will accept the invitation to attend.

Mr Adams said the decision to attend was in keeping with the “transition that is ongoing” between Ireland and Britain.

“There is now a peaceful and democratic way to end the Union and Partition. This is a work in progress and Sinn Féin accepts that there is an onus on us to persuade our unionist neighbours that their interests are best served in a new, agreed Ireland,” Mr Adams said.

However, the Sinn Féin leader said the decision might not be welcomed by some and may cause difficulty for some republicans.

“I would appeal to them to view this positively in the context of republican and democratic objectives and the interests of unity and peace on this island,” he said.

“The real significance and value of President Higgins’s visit will only be realised if peace and the political processes are built upon by both Governments. That means implementing all outstanding elements of the Good Friday and other Agreements.”