McGuinness handles grilling by his own watchdog over spending 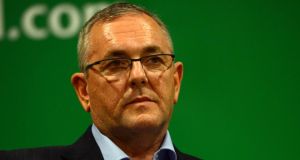 John McGuinness’s position as chair of the Dáil Public Accounts Committee was never seriously in jeopardy, as none of the issues relating to his time as a junior minister back in 2007 and 2008 had the potential to fell him.

In over three hours of questioning by his PAC colleagues yesterday, those doubts were largely dispelled by McGuinness in a calm, assured and largely low-key performance, although the hearing got messy at the end as it descended into partisan stuff, which Labour’s Derek Nolan described as a farce.

The hearing was prompted by reports that McGuinness, as minister of state, had argued his wife should accompany him on trade trips, albeit at her own expense. She did travel with him on the 2008 St Patrick’s Day trip to Seattle at State expense.

All were ultimately explainable, though the affair did not leave him wholly unscathed. It has been established he had no role or say in the refit of his office. He was prepared to pay for his wife’s travel, which downgraded that charge. In any instance his request was refused and his wife did not travel on any trade mission.

On the St Patrick’s Day trip the rules at the time allowed spouses to travel. His son’s generous overtime payment, harder to justify, came about because he was covering an unfilled maternity leave post.

McGuinness emphasised it happened six years ago, when a different dispensation applied. He made qualified apologies – but he also defended his view that there were exceptional cases where the State should foot the bill to allow a spouse accompany a minister.

There were a few criticisms, the most pointed of which was Independent Shane Ross saying the McGuinness family had done well out of the State, and Fine Gael’s Simon Harris pointing out that former Fás boss Rody Molloy had defended extravagant foreign trips on the basis that he broke no rules.

A clear round all told, but maybe a time fault over another one-night trip to London in November 2008 where the State paid for his wife – which he will need to explain.

Then after a recess the whole thing descended into a partisan spat. Fine Gael TD John Deasy said he had no doubt that people in Government circles were using the controversy to force the PAC chair out.

McGuinness responded by saying he was “damned sure” the information was being leaked from the department. Cue a heated row.