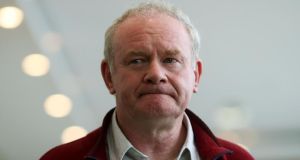 The murder of Mr McGuigan in Belfast last month, which was suspected to have been in retaliation to the killing of Mr Davison, has sparked a crisis that threatens to cause the collapse of the Northern Ireland power-sharing government.

“The people we have to blame . . . are the murderers of Jock Davison and Kevin McGuigan,” Mr McGuinness said at the Sinn Féin party think-in in Co Meath yesterday. “Isn’t it absolutely ridiculous that criminals, low-life criminals, had the power and ability to create a set of circumstances which [Ulster Unionst Party leader] Mike Nesbitt used for his own selfish gain and possibly force the collapse of the institutions?”

Mr McGuiness said anyone questioning his loyalty to democracy and peace should examine his track record. He said it was now time for unionist parties to stand with him in condemning violent activity.

“My track record of doing that in eight years as Deputy First Minister is second to no other minister of that executive. I’ve stood with Peter Robinson and the chief constable of the PSNI when three soldiers were murdered in Antrim. I stood with them whenever Constable Steven Carroll and Constable Ronan Kerr were murdered, when prison officer David Black was murdered, even against the backdrop of my life being threatened by dissident republicans.”

Mr McGuinness said today would mark a year since the death of former DUP leader Ian Paisley. He said the current crisis would never have been created under the leadership of Dr Paisley.

Meanwhile, Sinn Féin leader Gerry Adams said he and Mr McGuinness would meet PSNI Chief Constable George Hamilton in the coming weeks. He is also seeking a meeting with Taoiseach Enda Kenny over the ongoing crisis and said it was time for the Fine Gael leader to rise above party politics.