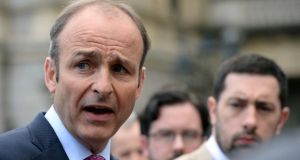 Mr Martin said it was important to stress that ’by their very nature’ section 19 investigations were ’preliminary’, adding that people had not expected Mr Ryan’s investigations to ’take that long’. File photograph: Eric Luke/The Irish Times

Fianna Fáil leader Mícheál Martin said the clear legal advice to him in 2006, when he was Minister for Enterprise, Trade and Employment, about evidence of alleged of tax evasion by a number of former politicians, was that it be referred on to investigative bodies outside his Department without delay.

Speaking to press in Co Kildare today, he said that had he delayed handing on documentation to bodies including the Garda Bureau of Fraud Investigation, the clear advice was that “we may never get a prosecution and it could be prejudicial to the public interest”.

Mr Martin said today he had been briefed by Department officials when he was appointed in 2005, on the ongoing Section 19 investigations into three companies.

He had then met the Department’s ‘authorised officer’, Gerry Ryan, who had been appointed in 1998 to conduct the investigations. It was important to stress that “by their very nature” section 19 investigations were “preliminary”, he said adding that people had not expected Mr Ryan’s investigations to “take that long”.

“I took the issue very seriously, appointed Matthias Kelly, QC, to give me independent legal advice. He did very comprehensive work as well in terms of meeting a whole lot of people, meeting Mr Ryan, making his assessment on what the best way forward was, the key point being the fact that Section 19 investigations are by their very nature preliminary and do need further investigation by the relevant authorities.”

“Matthias Kelly’s advice was very clear at the time and this was a key point, that further delay we may never get a prosecution and it could be prejudicial to the public interest not to send it over. He also advised its important there would be conclusion for people against whom allegations were being made.”

Asked about the inclusion of a number of former senior Fianna Fáil members on the list of alleged tax defaulters, he said: “I’m not going to comment because of obvious issue like natural justice, other than to say this. One has to be very careful here, genuinely.”